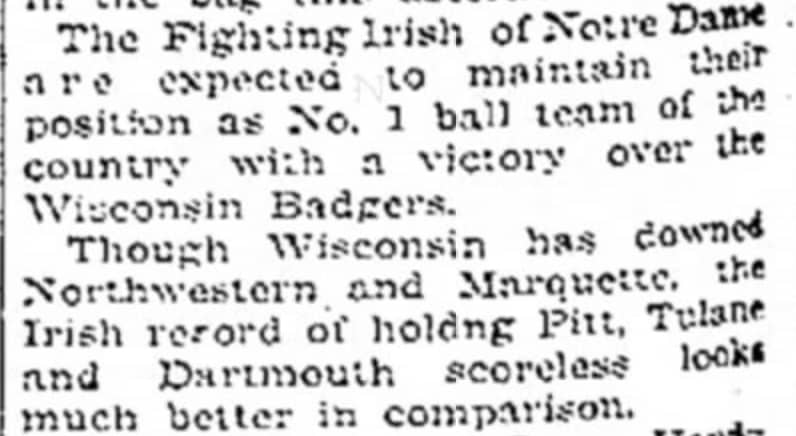 How Wisconsin got the nickname 'Badgers'


There’s only one “Badgers” nickname in NCAA Division I college athletics, and it belongs to the University of Wisconsin. The name has deep ties to the state, dating back roughly 200 years.

Here’s everything we know about Wisconsin’s mascot and nickname.

What was Wisconsin called before the Badgers?

Before Wisconsin’s sports teams adopted the nickname “Badgers,” they were often informally referred to as simply “Madison,” the “Wisconsin football eleven,” “Madison team,” the “Wisconsin boys” or “Madison boys.”

When did Wisconsin get the nickname Badgers?

Similarly to other states, like Michigan and the Wolverines, the University of Wisconsin “nickname, ‘Badgers,’ was borrowed from the state,” according to the athletic department’s website. The state of Wisconsin is called the “Badger State,” although not for the reason you probably thought, or expected.

Lead miners in the 1820s traveled to Wisconsin and to stay safe and warm in the winter, they had to “live like badgers” in tunnels that were built underground, according to the school. The Weekly Wisconsin reported on July 21, 1836 that “It is easily to be perceived that our friend ‘A Hawk Eye’ has not long been a resident of Wisconsin – if he had been, he would know that we have long possessed the honorable cognomen of Badgers. The inhabitants of the western part of Wisconsin, are or were, when the name was given engaged in digging Lead Ore – hence from the habits of that animal, or boroughing [sic]in the earth during the day, we are called Badgers. Therefore, being opposed to all changes or innovations in old or longest blushed names or customers, and having a great aversion to all long names, whether belonging to men in their individual or public capacity, we wish to etain [sic]our old name, which has obtained the sanction of time.”

In a story titled, “The Happy Miner,” published in the Milwaukee Sentinel on Feb. 13, 1838, the paper quoted a miner as saying, “Danger – where is there not – on the earth or beneath it – in the mountain or in the valley – on the ocean or in the quiet of nature’s most hidden spot – where is there not danger? Where has not death left some token of his presence? … We find death in the means we seek to perpetuate life – ’tis as range riddle – who shall solve it?”

There was a “Miner’s Free Press” and the Milwaukee Sentinel report on the “Miner’s Bank of DuBuque,” showing the importance of the mining industry in the region during the early 1800s if there were newspapers and banks dedicated to miners.

MORE MASCOTS: How Alabama got the nickname ‘Crimson Tide’

When was ‘Badgers’ first officially used in publications?

The phrase “Wisconsin Badgers” predated references to the University of Wisconsin’s athletic teams, since “Badgers” first applied to people in the state, originally miners. The badger became the university’s mascot in 1889, when the school used a live badger. The state of Wisconsin named the badger its official state animal in 1957.

“The original badger mascot was too vicious to control,” according to Wisconsin athletics’ website. “On more than one occasion, the live badger escaped handlers before a sideline hero recaptured the animal with a flying tackle. It was decided in the interest of fan and player safety that Wisconsin’s mascot be retired to the Madison Zoo. The Badger Yearbook replaced the live badger with a small raccoon named Regdab (badger backwards) and passed it off as a ‘badger in a raccoon coat.'”

The university’s use of a raccoon mascot continued until at least the late 1940s.

The Capital Times of Madison, Wisconsin, reported on Feb. 4, 1949, “Remember the little ‘Badger’ mascot the Wisconsin football team had last fall. The little raccoon turned out to be a little rascal, so Harold Otterback, Tom ‘Tinker’ Kittel, Bob ‘Red’ Wilson and Co. decided to part company with the frisky fellow. He turned the house upside down, knocked books, lamps and other furnishings around to the tune of $30 worth of damages one time.”

Using the newspapers.com database, the oldest reference to “Wisconsin Badgers,” in a college athletics sense, that NCAA.com found was published on Aug. 15, 1896 in The Centralia Enterprise and Tribune: “The Fighting Irish of Notre Dame are expected to maintain their position as No. 1 ball team of the country with a victory over the Wisconsin Badgers.” A screenshot from that newspaper story is shown below.

A story published on Nov. 19, 1895 in the Portage (Wisc.) Daily Democrat made a remark about the “Badger Boys” — referring to the University of Wisconsin’s football team after a game against Minnesota.

In the Aug. 26, 1895 edition of The Saint Paul Globe, there was a reference to an amateur baseball team called the “Wisconsin Badgers.”

MORE: Here’s how Arizona got the nickname the ‘Wildcats’

How was Bucky Badger created?

California-based illustrator Art Evans is credited with drawing Bucky Badger in 1940 and nine years later, the University of Wisconsin’s current mascot came to life when art student Connie Conrad designed a papier-mache badger head, which was worn by cheerleader Bill Sagal to the school’s homecoming football game, according to the university. Bucky Badger’s likeness was copyrighted in Oct. 2, 1940, which is when the mascot’s birthday was designated to be, according to the Library of Congress.

The badger mascot wasn’t immediately referred to as Bucky, as it was previously called Benny, Bernie, Bobby, Bouncey and Buddy, before a naming contest resulted in “Buckingham U. Badger,” or “Bucky” for short.

In a weekly letter published by The Capital (Madison, Wisc.) Times on Nov. 19, 1949, the newspaper wrote, “We’re awfully glad you came along as the Wisconsin trademark this year, Bucky. You’ve done something for Wisconsin, as anyone will testify who has been out at Camp Randall on a Saturday afternoon. Your jaunty, belligerent swagger has been a fitting symbol for the fighting spirit Wisconsin has carried into its games. Our boys have been behaving out on the field just as you would if you were to step off one of those posters. The co-eds, of course, as crazy about you, but they do you a great injustice when they call you ‘cute.’ That’s not the word, Bucky, as the boys from Indiana, Northwestern, Iowa and others have found out. There was nothing ‘cute’ about what happened to them when they ran into the spirit of Buckingham U. Badger. We hope that you will stay around with us for a long time and continue to symbolize what Wisconsin stands for in this athletic world. Here’s to you, Buckingham. You’re a first class fightin’ man.”

According to Wisconsin, it takes roughly seven students to fulfill all of the requests for Bucky Badger today, including university athletic events, community service events and even weddings.