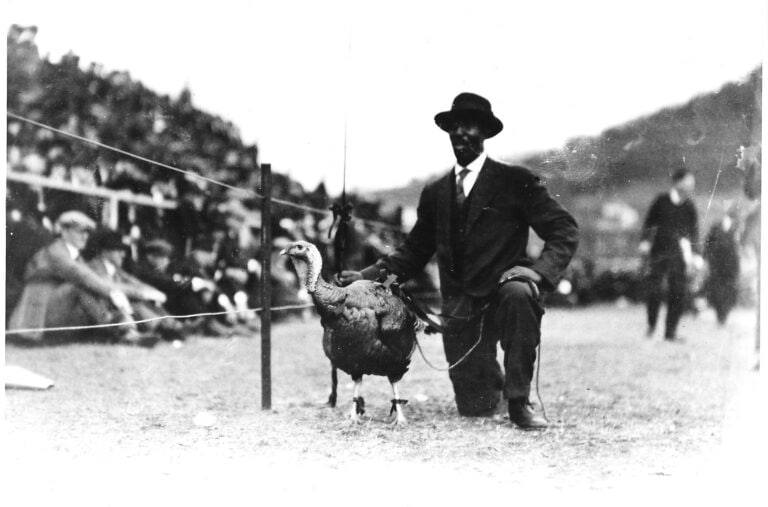 How Virginia Tech got the nickname 'Hokies'


If you’ve ever watched Virginia Tech compete in an athletic event and wondered, “What is a Hokie?” you’re probably not alone. Because 125 years ago, “Hokies” didn’t exist. While it’s now the nickname for the school with an official definition of “a loyal Virginia Tech fan,” according to the school, the word itself was made up two centuries ago.

There’s a chance that some Hokie fans or students may not even know where the term came from!

In a lifestyle column published in the Daily Press of Newport News, Virginia, in August 1990, one reader wrote in to the paper, “I have a number of friends who are Virginia Tech graduates. I have asked them where the term ‘Hokies’ comes from, and they seem either unwilling or unable to give me a satisfactory explanation.”

Here’s the origin story about how Virginia Tech became the Hokies.

What was Virginia Tech called before the ‘Hokies’?

Virginia Tech athletic teams used to be called the “Chappies,” “Techs,” “Techmen,” and “Gobblers,” according to the school’s website, in reference to the school’s mascot, which has evolved from a turkey to the “HokieBird.”

“The HokieBird, how it became a turkey is actually kind  of a long morph, you know?” said Laurel Rozema, a processing and special projects archivist for Virginia Tech’s university libraries. “We actually were known was the ‘Gobblers’ for a very long time, officially, starting in about 1908, 1909, and there’s several different stories as to why we were known as the Gobblers. I’ve read about four or five of them, but the most commonly repeated one is that the student-athletes were really voracious eaters and they would just gobble up their food and so they just starting becoming known as the Gobblers, unofficially, and by about 1912 it was an official term for the team.

“Because of the word ‘Gobblers,’ also having secondary meaning, the turkey, in 1913, Floyd Meade, who’s probably the first mascot performer at Virginia Tech. He had been there since the 1890s. He actually started bringing live turkeys to the football games and he taught them how to do tricks, like flapping their wings and gobbling on command and walking them on a leash.”

Here’s a picture of Meade with a turkey, courtesy of Virginia Tech’s website.

“I think that’s probably how our HokieBird — that’s why it’s a turkey is because of the term ‘Gobblers’ and the live turkeys that used to come here to the games,” Rozema said.

MORE: Here’s the true story behind how Arizona got the nickname ‘Wildcats’

The oldest reference I could find to “Virginia Tech gobblers” on the newspapers.com database was on Nov. 30, 1922, in the Daily Press (Newport News, Virginia) in a story that previewed a Virginia Tech-VMI football game.

“Undaunted by the feathery coating of snow that slowly sifted into Miles Field this morning, the Virginia Tech Gobblers would up their more strenuous work today preparatory to the Turkey Day battle with the Flying Cadets of V.M.I.,” the newspaper reported. The most recent newspaper reference to “Virginia Tech Gobblers” that NCAA.com was able to identify was in December 1985 in The News Leader (Staunton, Virginia) after Dell Curry-led Virginia Tech beat Virginia in men’s basketball.

When did Virginia Tech get the nickname ‘Hokies’?

In 1896, Virginia Agricultural and Mechanical College rebranded to Virginia Polytechnic Institute, and with the name change of the school came the need for a new cheer. Virginia Tech held a contest among the students to see who could write the best cheer and senior O.M. Stull won for his “Old Hokie” cheer, according to Virginia Tech.

“Later, when asked if ‘Hokie’ had any special meaning, Stull explained the word was solely the product of his imagination and was used only as an attention-getter for his yell,” according to the article on Virginia Tech’s site.

“That’s what everything seems to point to,” Rozema said. “He, himself, said that he was just doing it to get people’s attention and it really didn’t mean anything to him.”

Rozema said that Stull originally spelled the word “Hoki.” “The ‘E’ wasn’t added until a few years later,” she said.

MORE: How Yale became the ‘Bulldogs’

The phrase “hoky poky” — which is now spelled “hokey pokey” — was common in the late 1800s, meaning it could’ve potentially been an inspiration for Stull. “I would assume that hoky poky might have been in the back of his mind if he knew it at the time,” Rozema said.

Do any other schools have the nickname ‘Hokies’?

Virginia Tech is the only NCAA Division I school with the nickname “Hokies.”

When was “Hokies” first officially used in publications?

A search on newspapers.com for the word “Hokies” in print publications in 1896 yielded results for the words “hoky,” “honey,” “Rocky,” “holy,” “houses,” and “Henry,” among other words. But not “Hokies,” so it really does appear that the word was made up.

In fact, the first newspapers.com search result for the phrase “Virginia Tech Hokies” wasn’t until 1954 in an issue of The Times Dispatch in Richmond, which wrote about Virginia Tech’s surprising win against Clemson.

The Times Dispatch is also responsible for the first use of “Hokies” that NCAA.com was able to locate in the newspapers.com database. That was on Feb. 24, 1918, when the newspaper wrote about the reception that the school’s basketball team received. This story was published so long ago that the paper called the school “Virginia ‘Tech,'” with “Tech” in parentheses in the first sentence. The use of “hokies” was in reference to the school’s cheer, not the students.

“The entire corps of cadets with its superb cadet band met the home coming [sic]Techs at the station and when Captain Cocke and his [team]appeared on the platform the band struck up ‘play ball,'” the newspaper reported. “Tech’s famous song, and the corps marched the team to the mess hall, where the gathering broke up after givin [sic]several ‘hokies.'”

MORE: How Wisconsin got the nickname ‘Badgers’

What ever happened to O.M. Stull?

Stull is credited with creating the nickname “Hokies,” and he later became the president of the Liberty Limestone Company and the superintendent of the Pulaski Iron Company, according to newspaper reports.

In June 1900, he posted an ad in a newspaper that was addressed “to owners of mineral lands.”

“As a skilled and experienced chemist, I offer my services to those who have valuable lands containing ores or deposits. Analysis and report thereon will be made to any one desiring such services. Charges reasonable. Laboratories at Victoria Furnace.”