OMAHA, Neb. — There was smoke coming from the Vanderbilt dugout. Were the bats on fire? No, that was Tim Corbin, talking to his team. Make that barking at his team. The Commodores coach was later asked if he could relate the rather fiery and one-sided conversation.


“Not that you can say here,” Corbin answered.

It was the fourth inning Wednesday night and his team was going down the drain in the College World Series, trailing Stanford 4-0 after an hour of — for Vanderbilt — astonishingly ugly baseball. Three errors. Another misplayed fly ball. Enrique Bradfield Jr. came into the game leading the nation with 46 stolen bases and had never been picked off all season. He was picked off. Reliever Nick Maldonado took the mound with an immaculate strikeout-walk ratio of 52-6. He walked in a run on four pitches. Corbin had to go to the mound in the fourth to take out his 17-year-old starter Christian Little, who had struggled but hadn’t gotten much help from his defense, either.

Corbin remembered looking around his gathered infield when he made the pitching change. “I didn’t think the eyes looked good,” he said. “I thought we were pressing a little bit. Didn’t really handle the situation very well. We had to have some type of response.”

He would later use words like tentative and sloppy. Adjectives not often attached to Vanderbilt baseball. “We know we played pretty much the worst baseball in four innings, both sides of the ball,” Bradfield said.

So during the middle of the inning, Corbin gathered his team together for a discussion with a vocabulary far more colorful than the Commodores’ white uniforms. “If we were going to lose, we’re going to lose playing aggressively and I just didn’t think we were,” he said later. “It was more of a challenge than anything else. Rare moment because, first of all, I don’t like doing that. And second of all, it’s their game. It’s theirs to win or lose, and you don’t ever want to interfere. But at the same time, I didn’t feel like they were playing like themselves and we needed to snap out of it.”

Dominic Keegan promptly hit a two-run homer in the bottom of the inning, so they apparently heard. But the real answer came later. How was Corbin to know that in the end, the same players huddled around him would be hugging each other on the field, saved at the 11th hour by one of the more remarkable ninth-inning rallies in recent Omaha memory?

The chance at a repeat still lives for the 2019 College World Series champions after the 6-5 Houdini victory over Stanford. More than that, the chance is starting to look rather ominous for the rest of the field. By Friday afternoon, when Vanderbilt plays North Carolina State, Kumar Rocker will be fully rested and ready to start. If the Commodores win that one and force a Saturday game, Jack Leiter would seemingly be in position to start. The Vanderbilt aces are back on the table in Omaha.

And it is a team that should be in full baseball-on-the-brink mode. In the past five days of growing pressure, the Commodores have won by a run, lost by a run and won by a run. They survived a one-run game and extra-inning victory in the regional, and two close games with East Carolina in the super regional. In their last seven tournament games, only five of 68 innings have ended with a margin of more than two runs. “Nothing’s been easy for the group,” Corbin said.

In other words, a roll of the drums, please. Here comes Vanderbilt.

“We might not be the most talented team, but the thing that you can’t deny the kids is they are tough,” Corbin said. “And every time you challenge them, they come back. And I appreciate that. I appreciate they’re fighters.”

Reliever Luke Murphy, who struck out Stanford’s Kody Huff with the bases loaded in the eighth inning, afterward summed up Vanderbilt’s situation: “Anything is possible.”

Who would question that, after Wednesday night? Before then, teams with the lead after eight innings had won 146 of the past 153 games in Omaha, But not this one. 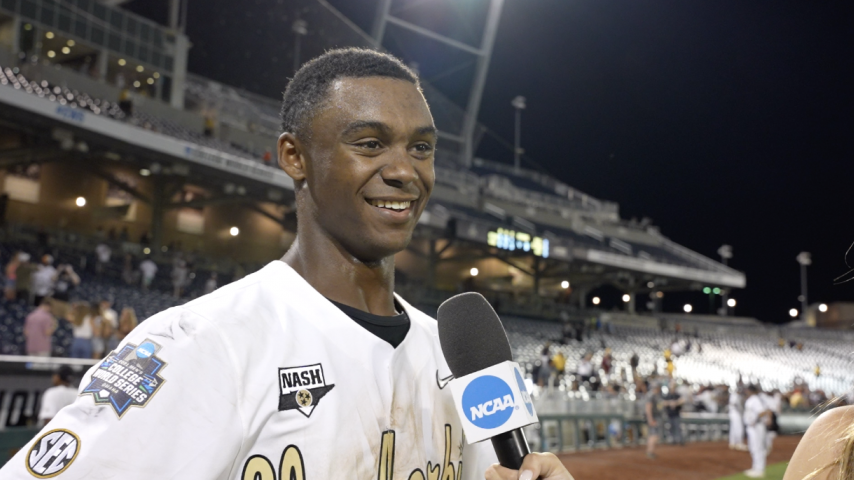 Stanford led 4-0, then 5-2, then 5-4 in the seventh inning. The Cardinal had gotten another big game from Mr. June. Brock Jones had homered and doubled in three runs, giving him 18 RBI for the NCAA tournament. All Stanford needed was for someone to finish the job.  What was it coach David Esquer said the other night about his pitching plans for Wednesday night? “We’re just going to kitchen sink it.” That’s what elimination games are in the College World Series, the kitchen sink. And that’s why the Pac-12 pitcher of the year and the Cardinal’s ace starter was warming up in the bullpen in the seventh inning.

Brendan Beck got the call. He struck out five batters in a row, but the lead was still that one fragile run with a final inning left to get through. “Going into the ninth, we all knew we could do it,” Bradfield said. “We’ve done some crazy things this year.”

Beck retired the first two Vanderbilt hitters in the ninth. That made eight batters down in a row. One more out and Stanford was moving on, while Vanderbilt was going home.

Then the world reversed course in TD Ameritrade Park. Esquer would later credit Vanderbilt for “creating that inning out of nothing against an unbelievable pitcher.”

First, a walk to Javier Vaz, who was making only his seventh start of the season and was down to his last strike.

Then, an infield singer by pinch-hitter Spencer Jones, who had one previous at-bat in the NCAA tournament and whose last hit came on May 26.

Next, a sharp RBI single by Bradfield to tie the game and send Jones to third. Bradfield had struck out in the seventh, badly chasing a Beck breaking ball in the dirt, and had been enraged at himself in the dugout afterward. He took that lesson to the plate in the ninth. “I was, of course, frustrated because nobody wants to do that,” he said. “But I knew I had to see it pop out of his hand. I was looking for a fastball and just saw it and reacted to it.”

Beck had to somehow find the last out with Carter Young at the plate. Then he threw a pitch over catcher Huff’s head. Salvation and another chance had come to Vanderbilt with a wild pitch. The symbol of their inexplicable victory? Jones losing his jersey in the uproar and spending the rest of the celebration bare-chested.

Esquer has been around long enough to expect nights like this, for and against. “That’s what happens here at Omaha sometimes,” he said. “You get in those late innings and sometimes you have those magical endings for one team or another.

Time will tell how far the Commodores can take this magic.

“Elimination games are just different because you know that if things don’t go your way, the season’s over,” Corbin said. “There’s some emotional feelings that way, and I’m sure it can pull you down. It’s tough to get inside this environment and play with freedom.”

So maybe that’s what his fourth inning soliloquy was about. Freedom.

“I’m not saying that discussion had anything to do with what happened,” he said. “But at that point we just needed to snap out of whatever fog we were in, because we were not playing like ourselves.”

They might be after Wednesday, with future first-round picks A and B both ready to pitch. That now becomes North Carolina State’s problem.