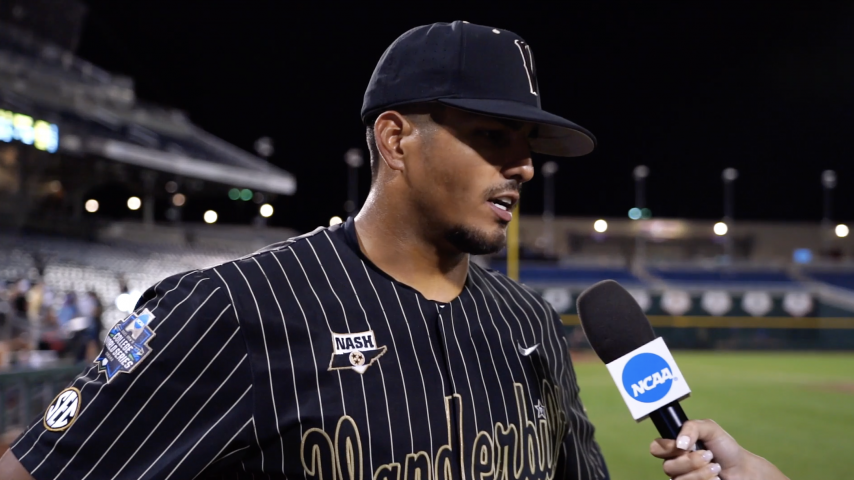 OMAHA, Neb. — The big news from the College World Series Saturday night was not that Vanderbilt won. The big news was how.

Everyone knows how it is with Vandy. The Untouchable Two get most of the headlines, and why not? Together, Kumar Rocker and Jack Leiter have blown through the postseason, leaving zeroes and victories in their wake. No muss, no fuss, not many baserunners. The assumption is easy to make; the Commodores will go just as far as their pair of aces can pitch them.

But not Saturday night.

The crowd came to see Rocker face Arizona’s high-octane offense. Five hours later, the evening belonged to the Vanderbilt bullpen, who shut down the noisy Wildcat bats — one run, four hits in 6.1 innings — and kept the game in place until the Commodores could finally win it in the 12th. It also belonged to Vanderbilt grit. The Commodores had to rally twice, overcome three errors, endure the disappointment of giving up the tying run in the ninth and the frustration of leaving the bases loaded in the 11th — three of the 13 runners they stranded.

Still, they found a way.

“Anytime you win a game like that — it wasn’t easy, it was long — I think it gives you a certain amount of confidence, as it should,” said Vanderbilt coach Tim Corbin. “Just a tough ballgame in a lot of ways. I guess both sides felt like that thing would never end. But it did.”

The decisive Vanderbilt inning wasn’t terribly loud — an infield single, a bunt single, a walk, then Jayson Gonzalez’ bouncer past a drawn-in infield. But the reward could be significant in the Commodores’ plans for a second consecutive title. Of the past 39 College World Series, the eventual champion has won its first game 35 times. It certainly beats the alternative which Arizona now faces: use up a lot of the bullpen and face an elimination game 38 hours later.

“I thought they got a string of quality bats one more time than we did,” Arizona coach Jay Johnson said. “That’s why they are who they are.”

All this was part of an unusual night at TD Ameritrade Park, where the one Commodore pitcher who had trouble was the most renowned arm on the field. Rocker has been as sure a thing in June as Father’s Day, but Arizona scored five runs against him in under six innings, though two were unearned.

He had allowed only three runs in 42.2 career postseason innings. The Wildcats had that many Saturday night after seven batters. It took Rocker 36 pitches to get out of the first inning.

His career postseason record coming into Saturday night was 6-0, with an earned run average you would need an electron microscope to see. Try 0.63. His name will be called quickly at the major league draft. That made the first inning a bit of a surprise, but Rocker was able to get out of it without heavy damage. “And then,” Johnson said, “he kind of kicked it into another gear.”

Indeed, Rocker retired 15 batters in a row — “I thought he was more attacking after the first inning,” Corbin said — but then came the sixth, when Ryan Holgate hit a homer to right that when last seen was headed for the Omaha Zoo. The 5-3 Arizona lead didn’t look much like a Rocker start.

But the lineup card warned everyone. Nine Wildcats, eight of them hitting over .300. So did the NCAA stat rankings. There was Arizona, second in the nation in on-base percentage, fourth in average, fifth in scoring. Now we know those numbers weren’t kidding. The Wildcats came in leading the country in doubles and mashed two off Rocker in his first six pitches. One fact was on display: Arizona really can hit that well.

But the Wildcats also struck out 19 times, one off the CWS record. That with only one walk. Johnson was asked afterward if maybe that suggested his guys were trying to do too much. He thought it was more Rocker. “Somebody’s going to give that dude $7 million here in a couple of weeks. So, no.”

Funny thing, though. Rocker accounted for only seven of the strikeouts, the bullpen providing the other 12.

So the star had something of an off-day and the Commodores survived, anyway. The winning hit came from the ninth man in the lineup, who had three RBI. “I’m just glad I’m in ninth because I get to see a lot more pitches,” Gonzalez said. It was the kind of edgy victory that can send a team places.

“I thought they hung tough,” Corbin said. “And the pitching allowed us to do that. If we don’t pitch the way we do, then we don’t get those moments.”

Vanderbilt does not live by Rocker and Leiter alone.

Share. Twitter Facebook Google+ Pinterest LinkedIn Tumblr Email
Previous ArticleThe College World Series made its grand return, fittingly, with another chapter in NC State's storybook run
Next Article DII Report: Bearcats, Bulldogs and Buffs — A look back at the DII year that was