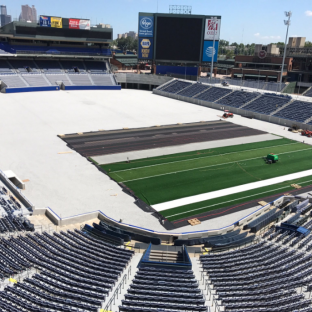 The dugouts have been removed. The natural-grass baseball field has been turned into an artificial-turf football field. A new grandstand has been constructed in what used to be right field.

Turner Field, the Braves’ home of the past 20 years, is now the Georgia State football team’s stadium.

Georgia State Stadium — the facility’s temporary moniker until a naming-rights agreement is done — will debut by hosting an open Panthers scrimmage Aug. 17, high school football games in the Corky Kell Classic on Aug. 18-19 and Georgia State’s season opener vs. Tennessee State on Aug. 31.

On Monday, the stadium was opened to the media for a preview.

Vestiges of The Ted couldn’t be missed — the original Hank Aaron statue still in its familiar location; the massive video board still in the same place as before, now the eighth-largest video board in college football; the familiar blue seats still in use; baseball decor still on some walls.

RELATED: 50 storylines and questions for the college football season

But there have been major changes, too. The Chop House restaurant/bar and the 755 Club have been renamed the State House Grill and the University Club, respectively. What used to be home plate is now an end-zone corner. The first seven rows of seats have been removed in places to facilitate football sight lines. Four new light towers have been installed behind the new grandstand along the east sideline.

Construction and design costs for the retrofit have totaled about $26 million to this point, Georgia State athletic director Charlie Cobb said. The costs have been funded from “a lot of university revenues,” he said, “and then part of it is a sponsorship piece.” The university hopes to put separate names on the stadium and the field, he said.

The tens of thousands of upper-deck seats remain in place, “but the plan is not to use them until we need them,” Cobb said. That leaves a seating configuration of about 25,000 in the lower and middle bowls, not counting the old seats over the former right field that won’t be used because of their distance and sight lines to the football field.

The stadium is in its third iteration. It originally was built as the site of the opening and closing ceremonies and track and field competition at the 1996 Olympics and then converted into a ballpark for the Braves, who played there from 1997 through last season.

. @gsustadium had media tour yesterday. Chalk on the field and the new seating getting installed in time for fall! pic.twitter.com/4bSC9M7aTh

Georgia State’s football program is in its eighth year, having played its home games the previous seven at the Georgia Dome.

Shawn Elliott, in his first year as the Panthers’ coach, is excited about what having its own stadium can mean to the program in a range of ways, including recruiting and fan interest.

“You can’t put a figure on it. It’s certainly a game-changer. It really is,” Elliott said. “You’ll find out two and three years down the road how exactly it’s going to really help you. But thus far, it’s been great.”

Then, borrowing from the stadium’s past, he added: “It’s been a home run for us.”

The Panthers’ players echo the enthusiasm.

“This new stadium is just going to bring that much more intensity for our team and even for our fans,” wide receiver Penny Hart said. “I’ve said I’m excited about 100 times already, but I really am.”

“Having our own home … it’s going to be a great experience,” defensive end Mackendy Cheridor said.

The conversion from Turner Field to Georgia State Stadium has been underway for about seven months, touching many parts of the facility.

Final touches before the turf goes down. #BeTheChange | 44 Days pic.twitter.com/BngcR0dgI3

The artificial-turf playing surface was largely installed last weekend, supplied by the same company, FieldTurf, that provided the field for the new Mercedes-Benz Stadium a couple of miles away.

The entry plaza has been renamed the 1913 Promenade, a reference to the year the university was founded. The top level of the State House Grill — the former Chop House — will be a pregame hospitality space for Panthers Athletic Club members. The posh space that contained Turner Field’s SunTrust Club won’t be used this fall but eventually will become a recruiting area.

Three suites, located at what is now the 50-yard line, have been converted into a TV broadcast booth and coaches’ booths. Seats have been renumbered.

“To come here and reconstruct this facility and to call it our own … you take pride in something that is your own,” Elliott said. “I use the example of when you bought your first house, how proud you were of it. If there was water in the sink, you’d wipe it out and all that good stuff. It’s no different here.

This article is written by Tim Tucker from The Atlanta Journal-Constitution and was legally licensed via the Tribune Content Agency through the NewsCred publisher network. Please direct all licensing questions to legal@newscred.com.