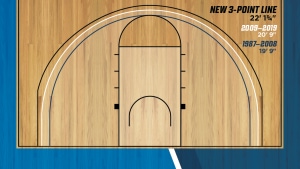 How the new 3-point line might affect college basketball


College basketball’s 3-point line in the DI men’s game moves back this season for the first time since 2008. In case you missed the news, the NCAA Playing Rules Oversight Panel approved moving it back to 22 feet, 1¾ inches in June. That’s the same distance used in international basketball.

So how will the new distance affect college basketball? Quite a bit, if history is any indicator. Expect 3-point shooting percentages to drop at first while driving lanes and post play opens up. But the 3-point shot will remain the most valuable in the game. More than that soon. Let’s start first with a broader look at what’s happened since the shot first came into being.

The 3-point line debuted in Division I men’s basketball in 1987. That year, teams attempted just 9.2 3-pointers per game, making 3.5. The 3-pointer barely made an impact — accounting for just 14.4 percent of all points in Division I that season. That didn’t last long.

By 2008, the college basketball landscape was fully submerged in the three ball. The popularity of the shot had skyrocketed. Made and attempted 3-pointers per game doubled, and the shot was responsible for a record 28.9 percent of all points in college basketball.

That offseason — 21 years after the introduction of the 3-point line — the NCAA voted to move the line back one foot, to 20 feet, 9 inches. That’s where it would stand for 11 years before the changes we’ll see this season.

The 2009 season — the first with an extended line since the shot was introduced — saw an immediate drop-off in 3-point performance.

But more recent history can give us an even better look at how this rule change will impact the game.

In the past two seasons, the NIT debuted several experimental rules in its postseason tournament, one of which included the new 22 feet, 1 ¾ inch 3-point line.

To get an idea of how modern teams will react to the change, we compared how teams performed from 3-point range in the NIT over the past two years vs. how those same teams performed in the regular season and conference play.

And this isn’t just a difference in postseason play of 3-point shooting dropping off. We did the same comparison to teams in 2017, when the NIT 3-point line was the same as the regular-season 3-point line. That year, teams actually shot 0.48 percent better from 3-point range in the NIT compared to the regular season, and took 2.6 more 3-pointers in NIT games than in regular season games.

But numbers only tell one part of the story. What about the people who will actually be affected?

In his seven seasons at Winthrop coach Pat Kelsey has transformed Winthrop into a dominant force in the Big South, and he’s done it with a heavy focus on 3-pointers.

Last season, Winthrop led Division I with 12.4 made 3-pointers per game, in a year where the DI average was at an all-time high of 7.8 per game. The Eagles got 44.7 percent of their total points from 3-pointers in 2019 — the third highest mark in the country, and way above the DI average of 32 percent.

His initial reaction to the new rule change?

Kelsey mentioned that the 3-pointer is one of the most valuable shots in college basketball. He doesn’t see that changing by moving the line back.

The numbers back him up on both counts.

We can look at the expected value for the three different major categories of shot (3-pointers, 2-pointers, and free throws) by taking the possible points for each made shot and multiplying it by how often a shot is made. This is a bit of an oversimplification, since it doesn’t take into account the difference between a layup and an 18-foot jump shot, but it gives a pretty good idea.

And that idea is that since the adoption of the 3-point line in 1987, the 3-pointer has had the highest expected value of any of those three shots every single year. That includes 2009, when 3-point shooting saw its biggest drop in performance during the first year with an extended line.

Still, Kelsey does believe the new line will affect the game, mainly by increasing spacing on the court. In fact, his team has occasionally practiced with the NBA 3-point line (23 feet, 9 inches at the center) taped onto their court to drive home the value of proper spacing. Good spacing, Kelsey says, opens up driving lanes and increases post touches, which in turn help increase high-percentage 3-point chances.

“That’s how you generate 3-point shots, by attacking the basket and collapsing the defense,” he said. “The highest percentage 3-point shot is inside-out.”

“Our motto has always been playing inside out,” he said. “It’s not like we just come down the court and jack threes up all day.”

McAuley is in his first year as Wofford’s head coach this season, but he’s been around the team in assistant and associate head coaching roles long enough to know that the Terriers have built an identity around the 3-point shot.

Last season, Wofford shot 41.4 percent from deep — the second-best mark of any team in Division I. And McAuley believes that Wofford is just capitalizing on a growing trend in the sport.

“The way the game is changing, from the pro level all the way down, everyone is looking for shooters,” he said.

McAuley is right. Three-point shooting has become much more prevalent in the college game in recent years.

The 2016 season saw record highs in both made 3-pointers and 3-point attempts per game across Division I with 7.11 and 20.49 respectively. Those records have been broken every year since.

And if we look back at percentage of total points coming from 3-pointers, the trend is even more obvious.

As the head of a team somewhat leading that revolution, McAuley said that Wofford will fine-tune its strategy to accommodate the new line.

“We’re going to have to have some more plays that attack long closeouts,” he said. “With our ability to shoot the basketball the way we do, people are going to have to come out and guard us a little further out. So, I would be silly if I didn’t have some of those tweaks planned moving into this year.”

Apart from minor changes, McAuley doesn’t see 3-point heavy teams like Wofford being too frazzled by the change. Kelsey agrees, calling his strategy heading into this year “business as usual.” But both still predict a nation-wide drop in performance.

“For us, maybe it doesn’t change as much,” McAuley said. “But as a whole for the college basketball landscape, it’s going to be a big deal.”