How the DII football championship works: History and FAQs

When did the DII football championship begin?

The DII football championship as we know it officially began in 1973. Prior to that, DII football was known as the NCAA College Division and champions were named by the United Press International and Associated Press polls. From 1958 to 1972, six teams — Ohio, Pittsburg State, Arkansas State, and North Dakota State, San Diego State, and Delaware twice apiece — were unanimous national champions.

How has the DII football championship changed since 1973?

For the most part, the tournament hasn’t changed. It has long been a single-elimination tournament, pitting the best of DII football against each other for the chance to claim the national championship.

What has changed is the field. The original DII football championship consisted of eight teams, which lasted 15 years until eight more teams were added in 1988. In 2004, the field again expanded from 16 to 24, and in 2016 it added four more teams to get to the current 28-team format we see today.

How do teams get into the NCAA DII tournament?

Here’s a breakdown of the Super Regions:

What is the DII football selection process?

Since there are no AQs in the DII football championship, every team in the four Super Regions that is DII eligible can qualify for the tournament. The NCAA DII football national committee provides three Super Regional rankings over the final three weeks of the season, showing the top 10 teams from each region. Though it isn’t an exact measure of who will make up the final bracket, it helps to shine a light on those in contention.

Originally, the top seven seeds in each regional ranking advance to the DII football championship tournament. The top seed in each of the four Super Regions gets a first-round bye. Once the teams reach the national semifinals, the four teams are seeded No. 1 through No. 4.

In 2019, the DII football committee changed the seeding process. The changes were in the No. 5-7 seeds, where the committee has the flexibility to move those teams out of region or in-region to a closer destination to cut down on flights. For example, the traditional No. 2 vs. 7 and No. 4 vs. 5 regional matchups could become No. 2 vs. 5 and No. 4 vs. 7 if the travel plans make more sense. For more on those changes, click here for our interview with the committee.

Here’s a look at how West Florida won the 2019 national championship. 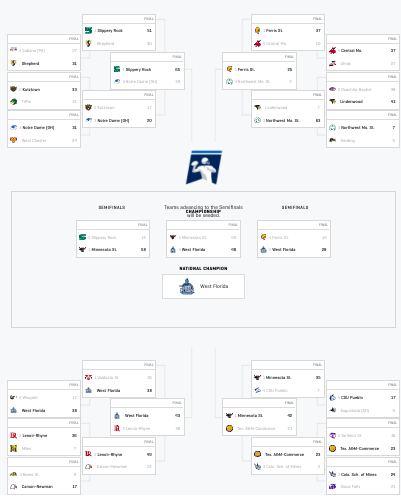 A lot has changed in the DII football landscape since that 1973 DII football championship. Many of those early champions went on to find success in both the FBS and FCS with three — North Dakota State, Montana State and Delaware — winning titles at the FCS level.

DII TITLE TOWN? Check out the programs with the most DII football championships

West Florida won its first title in 2019, which was its second trip to the title game since 2017. Valdosta State picked up its fourth national championship in 2018 in a record-setting DII football championship game over Ferris State. They are two shy of the record of six, held by Northwest Missouri State who continues to be an annual threat to add No. 7.

Here’s a list of all the DII football championship finals since 1973:

The 2021 DII football championship returns to McKinney ISD Stadium in McKinney after its debut in the 2018 season. This coming season’s grand finale will be held on Dec. 18, 2021.

McKinney marks the ninth host site for the DII football championship, and the fourth stadium in Texas to have the honors. The title game was a bit nomadic in its early days, before settling in Florence, Alabama for a 28-year run between 1986 to 2013. It spent three years in Sacramento to start before heading to Wichita Falls, Texas for two seasons. After one year in Longview, Texas it headed to Albuquerque, New Mexico for two years, until returning to Texas — this time McAllen — for a five-year run. Then it was on to Florence, followed by a four-year run in Kansas City, Kansas before returning to Texas once again.