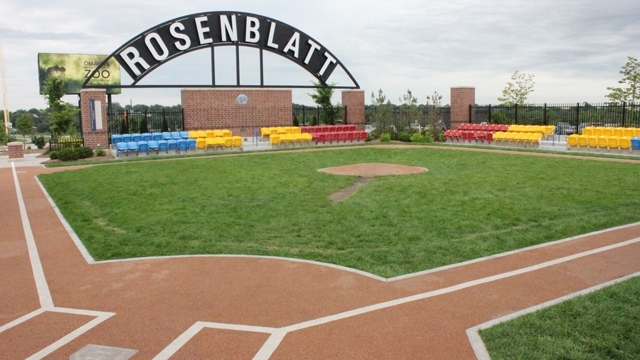 How the College World Series works: Format, history, how to win

The Omaha Eight is set and the College World Series will begin on Saturday at TD Ameritrade Park Omaha.

So what do you need to know about the road to the national championship?

The eight teams will split into two brackets. Oregon State, Cal State Fullerton, LSU and Florida State will make up Bracket 1, while Texas A&M, Louisville, TCU and Florida compose Bracket 2. The four teams will play in double-elimination format. This creates a Winners’ Bracket — consisting of both winners of the bracket’s first games — and an Elimination Bracket. Once a team loses its first game, every game becomes an elimination game for them, as a second loss sends them home from Omaha.

The two teams that advance from Bracket 1 and Bracket 2 face off in the CWS Finals. Their slates are wiped clean, previous wins and losses no longer matter. It’s a new best-of-three series, and the first team to two wins is the 2017 national champion.

THE ROAD TO OMAHA

The format has changed quite a bit since the inaugural College World Series in 1947. The current format was implemented in 2003 and has remained intact since. Sixty-four teams are selected for the field, where they are divided into 16 four-team Regional brackets. Those four teams play in a double-eliminaton tournament.

Sixteen winners eventually advance through those Regional tournaments, creating the Super Regionals. The Super Regionals are eight, best-of-three series, pitting two regions against each other. Once the first team gets to two wins in each Super Regional, eight teams remain.

So, what’s left for a championship? Here’s the breakdown.

Why would the two teams need an *if necessary game?

There are actually three possible outcomes for the second Saturday (June 24) in Omaha.

What happens if it rains?

Every game matters in Omaha. If it rains or in the event there is any weather considered unplayable before a game is played, it could be delayed or postponed to the next day. Tickets are still good for the game, whenever it is deemed suitable to play. In the case of weather causing unplayable conditions during a game in progress, it could be delayed for hours or even posptponed to the next day. There are no weather-shortened games in the CWS. Save that ticket, though. It’s still good for re-entry for the specific game, whenever play is resumed.

The NCAA makes it easy to follow along, providing weather updates on the CWS News page.

If you have reserved or general admission, you are permitted to reenter the park for the specific game you are attending. Reserved admission can re-enter through any gate, but general admission works differently. General admission ticket holders can only enter between Gates 3 and 4, and must go to the end of the line. Re-entry is not guaranteed for general admission. Note: Ticketing is separate for each game of a doubleheader.

What’s with all the bubbles?

Bubbles, pickles, rally monkeys. Expect to see a little craziness in Omaha, as it seems each year the teams come with new superstitions and improvised mascots.

Texas A&M had its rally pickles and bubbles going in its sweep of Davidson, and you can expect to see them in full force in Omaha. Other teams use cup or cap stacks to ignite a rally. Cal State Fullerton may travel in Hawaiian shirts. There has long been a tradition of interesting nuances or dugout visitors in Omaha’s history. Last season, LSU’s rally possum became so famous, he had his own Twitter account.

The team that often wins in Omaha is the team that is able to stay loose. What new traditions will will 2017 see? Well, that’s half the fun of the CWS.

The College World Series began in 1947 in Kalamazoo, Michigan. California was the first national champions defeating Yale in its first of two consecutive National Runner-Up seasons. After a quick stop in Wichita, Kansas in 1949, the World Series moved to Omaha, where it has remained for the past 67 years.

1947: The first CWS was not a double-elimination tournament. The eight teams were still split into two four-team brackets, however, there was no tomorrow for the losing teams.

1950: The CWS finds its home at Rosenblatt Stadium in Omaha. Texas is the first victor of the Omaha Era. Longhorns’ hurler Jim Ehrler tosses the first CWS no-hitter and Texas becomes the first repeat champions, defending its 1949 title.

1960: Jim Wixson throws the second no-hitter in CWS history for Oklahoma State. It was also the most recent no-hitter.

1987: Oklahoma State reaches the CWS for the seventh consecutive season. The Cowboys began and ended the seven-year run with national runner-up finishes in the first and seventh year of the run. They were not able to take home a title in any of the seven years.

1998: Southern California wins its record 12th national title. The program also holds the record for most consecutive titles, winning five in a row between 1970 and 1974.

2010: South Carolina becomes the last CWS winner at Rosenblatt Stadium. The event would move across town, and Rosenblatt Stadium would be torn down to serve as a parking lot for the Henry Doorly Zoo. Omaha didn’t get rid of it all, however. The Infield at the Zoo still remains in the new parking lot in honor of the CWS former home.

2014: TCU’s Brandon Finnegan becomes the first pitcher to throw an inning in both the College World Series and Major League Baseball World Series in the same season, spending just three months in the minors before going the Kansas City Royals big-league club.

2016: Coastal Carolina shocks the world, becoming the first team since Minnesota in 1956 to win its first CWS appearance.

Schools with 20 or more appearances:


Most titles by conference: