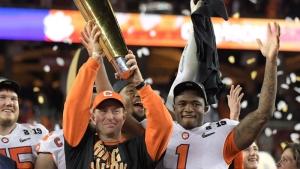 How the College Football Playoff works


We stepped into the College Football Playoff era starting with the 2014 season. The format: four teams in two semifinals played in bowl games and a national championship game. The semifinals rotate among six bowls: Cotton, Fiesta, Orange, Peach, Rose and Sugar. Each semifinal will be played around the New Year’s holiday with the national title game on a Monday night at least a week later.

A committee of university presidents approved a plan for a four-team college football playoff. Here’s what you need to know about the postseason format put together by the commissioners of the 11 major college football conferences and Notre Dame’s athletic director.

Who votes on the College Football Playoff rankings?

There are 13 members on the CFP selection committee. It’s a collection of people with experience as coaches, players, college administrators, athletic directors and journalists. Here are the members:

What is the 2019 College Football Playoff rankings schedule?

*Approximate start time. Rankings will be revealed live between the Kansas vs. Duke and Michigan State vs. Kentucky college basketball games.

The College Football Playoff Selection Committee will announce the playoff semifinal pairings and semifinal bowl assignments at noon on Sunday, Dec. 8. The committee responsibilities include ranking the Top 25 teams and assigning the top four teams (CFP semifinalists) to the semifinal sites. The committee will also assign teams to New Year’s Six bowls and consider geography when making these decisions.

How often are the rankings announced?

The Selection Committee members will meet weekly, in person, on Mondays and Tuesdays to produce rankings. The committee will issue its first rankings Nov. 5 after the completion of the 10th week of the regular season. The committee’s rankings will be announced on ESPN each Tuesday evening — until the selection announcement on Sunday, Dec. 8.

What will the committee use to rank teams?

Selection Committee members will have a wealth of information including review of video, statistics and their own expertise to guide them in their deliberations. They will emphasize obvious factors like win-loss records, strength of schedule, conference championships won, head-to-head results and results against common opponents. The playoff group has retained SportSource Analytics to provide the data platform for the committee’s use. It will also include general information such as each team’s opponents’ record. The platform will allow the committee members to compare and contrast every team on every level possible.

It should be noted that the committee will not use a single data point such as the Ratings Percentage Index (RPI) that is used for NCAA championships.

How does the voting process work?

The committee will rank the top 25 teams in the country and assign teams to the semifinals and to the Cotton, Fiesta, Orange and Peach bowls in years when they are not hosting semifinal games. The committee will identify small groups of teams that will then be evaluated against each other in a detailed and deliberative manner. The committee will then vote the teams into the rankings in a combined selection-and-seeding process.

Where and when are the games played?

The committee will place teams in the CFP semifinals as part of the New Year’s Six games. These games will be rotated among the Rose, Sugar, Orange, Cotton, Peach and Fiesta Bowls.

Teams in the Orange, Rose and Sugar Bowls are contracted outside of the CFP arrangement:

If the conference champion from these conferences is in the College Football Playoff, the bowl will pick a replacement from that conference. When these bowls have a CFP semifinal and their contracted champions do not qualify, the displaced champions will move to one of the other New Year’s Six games.

Also, when the Cotton, Fiesta and Peach Bowls do not host a semifinal, they will be a spot for a displaced conference champion and the top-ranked champion from a non-contract conference.

Here’s the upcoming CFP schedule, including the National Championship Game, through the 2025 season (which goes into the 2026 calendar year for bowl season).