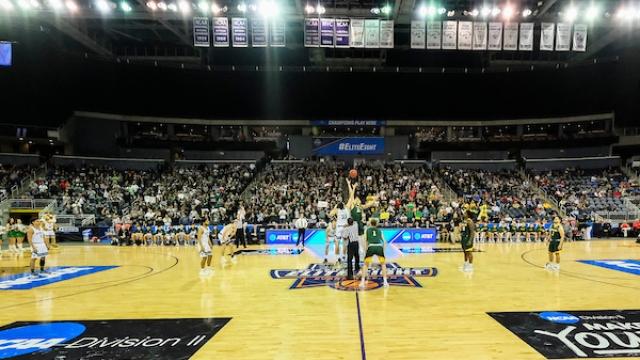 How the 2021 DII college basketball tournaments will work

The Division II Management Council and Presidents Council announced Feb. 5 that the 2021 DII men’s and women’s basketball tournaments will be held as planned.

Well, maybe not entirely as planned. But we will have both tournaments and that is both exciting and impressive.

To adapt to this season — and this season only — there will be some modifications to the 2021 bracket, including everything from eligibility to bracket size. It’s been a lot to keep up with for the past few months, so let’s make sure everyone is caught up on what these changes mean for the 2021 DII basketball championship.

Several conferences decided not to play

This is where it all began. Starting last October, several conferences announced late starts while some cancelled winter play all together. That said, several conferences did allow teams to independently create schedules to play the 11 games required for tournament eligibility. Teams like Mercyhurst, for example, put together a DII schedule despite the PSAC cancelling play. The Lakers are still eligible, and very much in play for a bid sitting at 7-0 on the men’s side.

Conferences that did not play this season:

^ Postponed conference play until Feb. 17 with teams given permission to schedule independently within the league.

The bracket is condensed to 48

On Dec. 7, the Division II Administrative Committee announced that the bracket for both the DII men’s and women’s basketball tournament would be reduced by 25 percent. That took 16 teams out of the mix, but when you consider we were playing with a reduced field during the regular season, this made sense both logistically and from a safety standpoint.

All said, 214 men’s teams and 214 women’s teams are participating this season, battling for one of 48 spots in their respective tournament.

Normally, eight teams from each of the eight regions head to the dance for a chance to advance to the DII Elite Eight. The assumption, using simple math, was that six teams from each region would now fill the bracket. The big question that remained: how will we seed that bracket? Regions like the Atlantic and West for example, had one conference participating. Would we see an all Mountain East regional tournament?

Restructuring the regions for 2021

Along with confirming that both tournaments will be played, the Council also decided to shift the regions around a bit, balancing the field a little bit and not giving some of the aforementioned conferences an all-conference regional, while making it less difficult for others in regions loaded with conferences and teams. It’s important to note, the division’s independent institutions will remain in their traditional region.

Here’s how the blended regionals will look:

*Conference is now in a different region as part of the one-year adjustments approved Feb. 5 by the Division II Management Council and Presidents Council.

From a fans perspective, this makes things very interesting, doesn’t it? Take the men’s side, for example. Suddenly the men’s Atlantic Region, which at the beginning of February had primarily the MEC, now adds the G-MAC to the mix. That means, Findlay, Hillsdale, Mercyhurst, Fairmont State, Charleston (WV), Glenville State, West Virginia State and West Liberty — all teams either ranked or receiving votes — are battling for six spots.

The men’s West Region now has the No. 1 team (Colorado School of Mines) and No. 9 team (Colorado Mesa) in the NABC rankings to contend with — that is quite the shakeup.

On the women’s side, the South Central Region now has three top seven teams from the LSC, according to the latest WBCA rankings, in No. 1 Lubbock Christian, No. 5 West Texas A&M and No. 7 Texas A&M-Commerce along with No. 15 Southwestern Oklahoma State and No. 18 Arkansas Tech from the GAC.

The first regional rankings are going to have a different look than usual. But, in the end we will have a tournament being played to decide a national champion, something DII sports hasn’t had in over a year.