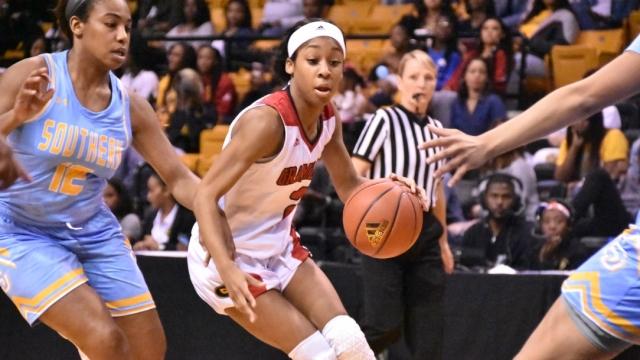 
There was a time when Shakyla Hill didn’t want to play college basketball.

The former Grambling State point guard, who became the only player in Division I history (men’s or women’s) to record multiple quadruple-doubles, originally had other plans.

“I didn’t want to go to college for basketball,” Hill told NCAA.com in a phone interview. “I wanted to be a lawyer.”

But the Grambling State Tigers were calling.

That lone opportunity was all she needed. By the time she graduated after the 2018-19 season, Hill’s name was stamped throughout the record books.

Her 612 assists and 488 steals rank first in program history. Those 488 career steals are also the most ever for a woman in the Southwestern Athletic Conference (SWAC). Hill ranks third on Grambling State’s all-time scoring list with 2,052 points and second on the all-time rebounding list (she’s 5-7, mind you) with 925 boards.

In 2018-19, Hill’s senior season, she was named SWAC Player of the Year and Defensive Player of the Year. It was also the third time the guard received All-SWAC First Team honors. She averaged 15.9 points, 7.2 rebounds, 4.8 assists and 3.8 steals in 127 games as a Tiger.

But what truly stands out on Hill’s resume is where she stands alone, as the only player in college basketball’s 127-year history to have more than one quadruple-double.

Shakyla Hill gets her first quadruple-double

Hill joined a select group on Jan. 3, 2018, when she finished with 15 points, 10 assists, 10 rebounds and 10 steals in a 93-71 win over Alabama State. She became just the fifth player ever to post a quadruple-double in DI basketball, and the first woman to record one in nearly 25 years.

“I felt something big was coming,” said Kailyn Gideon, who played with Hill during the 2017-18 campaign. “She was racking up points, assists, rebounds…all of that throughout the entire season.”

“One thing about Shakyla, (she’s) the kind of person who can do so much for your basketball team,” said Freddie Murray, the head coach of Grambling State women’s basketball. “She’s a very unselfish basketball player. She never really gets caught up in the stats or things like that.”

Murray, who coached Hill during her sophomore, junior and senior seasons, spoke highly of his former point guard.

“She’s just a consummate competitor, (and) the type of person, being at 5-7 and at her stature, you wouldn’t think she was capable of doing what she was able to do.”

Murray added that Hill flirted with quadruple-doubles “every night.” That night against Alabama State was no exception, although it took awhile for her to find a rhythm. She struggled in the first half against the Hornets and finished with four points on 2-of-5 shooting, four steals, three rebounds and three assists.

“In the second half, I kind of turned it on,” Hill said.

She responded with 11 points (4-of-6 shooting), seven rebounds, seven assists and six steals in 17 minutes of second-half action. Her tenth assist came with five seconds to play, thanks to a 3-pointer from fellow guard Monisha Neal.

“It was pure joy at that point,” Gideon said. “We were just really happy for her. I remember everybody jumping up and screaming. I just felt that (Shakyla) getting a quadruple-double was something she was always meant to do.”

“The national recognition caught me by surprise,” Hill said. “I’m LeBron’s biggest fan, so when that happened I actually cried. I’m very emotional. I cried like a baby.”

“I was really starstruck and humbled by the whole experience.”

“What makes that one so special to me is that I’m from Arkansas,” Hill said. “We played (Ark. Pine-Bluff) and it might be 45 minutes from my house.”

“They actually didn’t recruit me, so it was one of those ‘Gotcha’ moments.”

“Steals are always the hardest to get,” Hill said. “But I still didn’t know it was history. I didn’t know I was the only person (with two quadruple-doubles). When I found out, I cried.”

For Hill, it was about more than just setting a record. The fact that she did so while playing for, and representing, a historically black college and university (HBCU) made the moment that much sweeter.

“I always harp on the fact that we don’t get as much attention as your bigger schools,” she said. “To be in that spot in history, to be the only person and to also come from an HBCU is a very, very big thing.”

“It couldn’t have happened to a better person,” Murray said. “She went down as one of the best basketball players to ever play at Grambling. To be able to do it at a high level, at a mid-major school and then get the recognition that she did…it just kind of solidified her position in Grambling women’s basketball.”

“When people see that I have on a Grambling basketball T-shirt, they’ll say ‘Oh you went to school with that girl that got the quadruple-double, Shakyla,'” said Jasmine Forte, a second-year center who was Hill’s teammate in 2018-19. “So she’s well known everywhere, because I’m all the way in Virginia.”

“It actually means more to me than going down in college history,” Hill said.  “(They) pursued me and pushed me, and I dealt with some of the toughest times of my life at Grambling. But I also had some of the best times of my life. And I feel like I owe that university so much because they gave me so much. It means everything to me…to be able to go down in history at that school.”

“When we played against a lot of the larger schools, she garnered their respect…and rightfully so,” Murray said. “Teams really had to strategize against her.”

Shakyla Hill’s professional career and beyond

She started her professional basketball career in Serbia this past season, playing for ZKK Kraljevo in the ZLS League 1. And Hill was up to her old tricks again, as she became the first player to record a quadruple-double in ZLS League 1 history Jan. 25.

“So she actually has three instead of two,” Murray said, referring to her new career total.

Covered two of these when @shakylaa_ was at @GSU_TIGERS and now she added to her impressive resume with a professional quadruple-double #womensbasketball🏀 #goat pic.twitter.com/OQOGnUfanv

Just over a month later, Hill’s rookie season was cut short due to the COVID-19 pandemic. Now she’s back home in the States, prepping for another shot at her ultimate goal.

“I’m definitely planning on going back overseas,” Hill said. “I want to do more. I want to be in a bigger league and try to make my way to the WNBA.”

“You have some of your HBCU players in the NFL. So I’m trying to touch that surface, you know, to tell little girls that you can go to your local HBCU and get the dreams that you want.”

The former Tiger was hoping for a training camp invite from a WNBA team this spring. But the pandemic put that opportunity on hold. Murray thinks she would’ve gotten one too, if not for the world shutting down.

ACTIVISM: Listen, learn and act: The voices of NCAA student-athletes

“So next year, I’m just gonna try to go harder, and hopefully they have no choice but to pay attention,” Hill said.

“Keep her name on your radar,” Murray said. “I wouldn’t be surprised if she’s a name that you’ll be hearing from on the WNBA level sooner or later.”

No matter where basketball takes her, Hill already has plans for life after the game. She wants to go to law school, build a shelter for domestic violence victims and is currently setting up a foundation for kids that specialize in science, music and other non-athletic activities.

“I want to be able to find ways for other kids to get into and go to college for free without having to dribble a basketball and catch a football,” Hill said. “There’s nothing wrong with that, because that was my way through college. But there’s many other ways besides (playing sports).”

“She’s a multi-faceted young lady,” Murray said. “She started her own clothing line, she’s working on a book…she has a lot of things that she wants to do.

“She’s driven just as much off the court as she is on the court.”