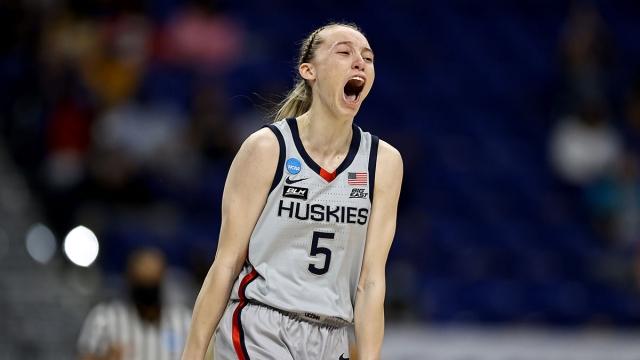 How Paige Bueckers’ freshman season compares to other all-time greats

We’ve seen many stand-out freshman performances in women’s college basketball history, but the constant buzz Paige Bueckers created throughout the entire 2020-21 season put the nation on notice — even before she put on a Huskie jersey.

Bueckers became the new face of women’s college basketball after Sabrina Ionescu was drafted to the WNBA as the No. 1 overall pick. Bueckers owned that spotlight every night.

She led her team to the Final Four and was the Naismith Player of the Year. She’s the first freshman POY in the 39-year history of the award and fourth first-year player ever, following men’s winners Kevin Durant (2007), Anthony Davis (2012) and Zion Williamson (2019).

This struck our curiosity to see how Bueckers’ freshmen year matched up to other all-time greats in their first year. It’s not a stretch to say she had the best freshman college basketball season by an individual, ever.

I compared her first-year stats to Tamika Catchings (Tennessee), Cheryl Miller (Southern California), Chamique Holdsclaw (Tennessee), Katie Smith (Ohio State), Sabrina Ionescu (Oregon) and fellow Huskies Maya Moore and Breanna Stewart. All had remarkable freshman seasons. I chose these players based on several factors, including some who went on to win the Naismith Award later in their careers.

Bueckers led UConn in points, three-point percentage, steals and assists. Here’s where she stands, stats-wise, against the legends listed above:

Bueckers’ name has been mentioned in many conversations with these greats. Comparisons to Diana Taurasi’s iconic junior and senior year were made when it came to discussing Bueckers’ relentless ability to score, confidence and even swag on the court.

Moore and Bueckers’ names have been mentioned in the same sentence more than once 2020-21 season. Most notably, when Bueckers scored 30-plus points in three consecutive games, breaking Moore’s record. Bueckers and Moore are the only Big East players who can say they have earned the conference’s player- and freshman-of-the-year honors in the same season.

Bueckers, the “walking highlight,” is known for her vision and crafty ability to pass to her teammates. Bueckers set the UConn single-game assist record, dishing out 14 against Butler on Feb. 27. Bueckers was the season record holder amongst all Huskies for assists with 168. Amongst the greats listed above, she dominates that stat line.

Out of these greats, Miller, Catchings Holdsclaw and Stewart helped their programs hoist an NCAA championship trophy. In fact, Stewart led UConn to four consecutive titles and won Most Outstanding Player in each tournament, which hasn’t been accomplished by any player in college basketball history. Stewie was the first freshman to win the MOP award since 1987.

Catchings’ 711 points in her first season were the most by a freshman in Lady Vol history. Moore and Smith both helped their programs make a national title appearance in their rookie year. The Buckeyes did not make the NCAA tournament for two years until Smith led the program to title contention. Bueckers and the Huskies were eliminated by Arizona in the Final Four, 69-59. A national title was about the only thing missing from her freshman year.

Here is a look at the Bueckers and the all-time greats’ awards and accomplishments during their freshman season:

The ceiling is high for Bueckers as she prepares for her second year with the Huskies. After helping UConn finish the 2020-21 season as the No. 1 team in the AP’s poll — including five consecutive weeks — the Huskies return the same starting lineup, while adding No. 1 recruit Azzi Fudd to its roster, according to espnW’s Class of 2021 Rankings.