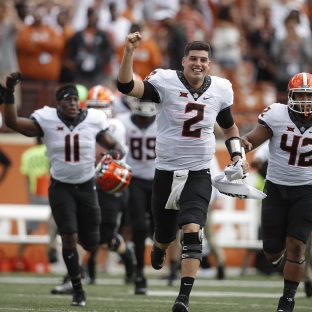 How Oklahoma State can make the College Football Playoff

In the first three years of the College Football Playoff, only five of the 12 teams that made the playoff debuted in the top four of the committee’s initial rankings. The other seven had to use the months of November and December to make up ground with head-to-head wins against higher-ranked opponents or the cannibalization of teams ranked ahead of them.

In 2014, Ohio State climbed from No. 16 to No. 4 in the final rankings before the Buckeyes eventually won the national championship. Oklahoma made the playoff as the No. 4 seed in 2015 after debuting at No. 15. The Buckeyes and Sooners are proof that teams on the outside of the playoff picture can sneak their way in, and Oklahoma State could do so this year.

The Cowboys debuted at No. 11 in the selection committee’s rankings on Tuesday night. Here’s how, and why, they could make the playoff.

Oklahoma State is currently in a four-way tie for first in the Big 12 with Oklahoma, TCU and Iowa State. In order to make the College Football Playoff, the Cowboys almost certainly have to win out, so we’ll work under the assumption that Oklahoma State finishes the regular season with an 11-1 record, then beats TCU in the Big 12 Championship. Wins over Oklahoma and TCU would allow Oklahoma State to leapfrog both schools in the CFP rankings.

The Bedlam hour is close at hand… #okstate #GoPokes pic.twitter.com/eX4V7kgf3V

Here’s how Oklahoma State can make the playoff if the team wins out: