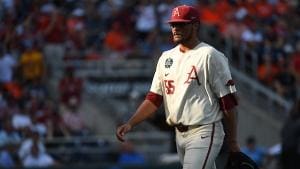 
The Arkansas Razorbacks are back in the College World Series once again. Right-hander Isaiah Campbell is a big reason why. The Arkansas ace had a breakthrough season, and it may have all started last year on the mound in TD Ameritrade Park against the defending national champs.

Don’t remember that June 22 start? Campbell was electric. Arkansas had the opportunity to send Florida home and the offense jumped out to an early 2-0 start. Campbell was able to give the bats the time they needed and made sure the Razorbacks took advantage of that opportunity. He blew through the first four innings a perfect 12 up, 12 down. He struck out six over that span, including four in a row from the first to the second. He overpowered the Gators’ lineup with all six strikeouts swinging.

The Hogs are National Championship Bound.

There was never denying Campbell’s talent, recruited as a highly-regarded high school hurler out of Kansas. But despite the overwhelming success Arkansas had in 2018 on its national runner-up finish, Campbell had an inconsistent season.

“You’re going to go through adversity in your life,” Campbell said. “It’s how you come back from it. You’re either going to get weaker or stronger from it. I just got stronger from it. I had an up and down year [last year], fans sometimes were upset with how I was performing. There was a lot of that adversity, especially for me having goals and not reaching them.”

MOP: The ultimate guide to every Most Outstanding Player | The CWS all-time lineup

Where Campbell was particularly strong last season, however, was in that start at TD Ameritrade Park. Campbell took the bump against the defending national champion Florida Gators in the semifinals. He delivered, going 5.1 innings of two-hit ball, striking out those eight and walking none.

The inconsistencies seemed to suddenly disappear.

“When you can do what I did against Florida on the biggest stage in college baseball in front of 25,000 fans, it really shows you what you can do if you have your mind right,” Campbell said. “Seeing that I could do it [in Omaha]just brought a lot of confidence and momentum into this year. I kept it going all year.”

“Mental focus,” Campbell said. “Last year, I let the stage get too big sometimes. This year, I’ve been able to slow the game down, and get out of those tough situations and stay in the present.”

CWS RECORDs: 9 unbreakable ones | 1 eye-popper from each team | 10 notable for the stat geek

Campbell was the ultimate workhorse in the SEC. He led the conference in innings and wins while finishing tied for second in starts with 17. Now, thanks to the year Arkansas faithful always knew Campbell was capable of, the Omahogs are back in TD Ameritrade Park. It’s their 10th trip to the CWS and they are chasing the College World Series title they were oh so close to capturing. But it isn’t a redemption story for Campbell.

“It’s rewarding,” Campbell said. “Some of the older guys, we felt like we had some unfinished business here, but we’re also a new team. We have a lot of inexperienced guys here, guys that weren’t on the team last year. We’re trying to find our own destiny, create our own history.”