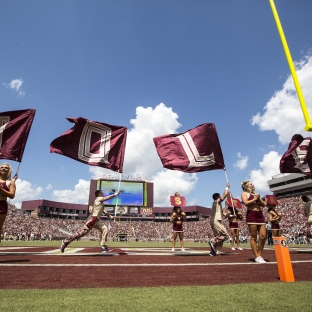 Hurricane Irma is scheduled to reach to the Florida coast this weekend, forcing college athletic programs to make tough decisions. Some of the football games planned for the upcoming weekend have been canceled or postponed, while others have been moved to earlier kickoff times.

Here’s which games will be affected by the hurricane in Week 2 of college football:

No. 16 Miami at Arkansas State — Canceled

Worried about traveling back to Miami this weekend after the game, Hurricanes’ athletic director Blake James decided not to risk his players’ safety. “We made the collective decision that we simply cannot put our student-athletes, coaches and staff in danger travelling to and from contests,” James said. The game will not be made up in the 2017 season.

No. 9 Florida State vs. Louisiana-Monroe — Moved to Saturday at noon

The game was originally scheduled for a 7 pm kickoff, but now the game will be played in the afternoon.

“We have moved the game time after consulting with a number of state agencies and based on the information we have on the potential impact on the state,” said FSU President John Thrasher.  “The earlier start will give ULM the opportunity to travel safely after the game, and provide many of our fans a chance to come to the game and return home in time to make any necessary preparations.”

Saturday’s @UConnFootball conference opener against USF will kick off at 10:30 a.m. due to Hurricane Irma. More info to follow. pic.twitter.com/pt345QSLDc

“By moving the game up an hour and half, that provides enough time for USF to play the game and get on a plane back to Florida and get their people safe and back to wherever they need to go,” UConn athletic director David Benedict said. “It wouldn’t necessarily be a terrible thing, from the standpoint of health and safety, for the USF football team and the travel party to get stuck in Connecticut, because it would be safe. But there are a lot of things that are going to be going down in Florida that a lot of those people are going want to be much closer to.”

The game was originally scheduled for a noon kickoff.

No. 24 Florida vs. Northern Colorado — Moved to Saturday at noon

#UNCvsUF has been moved to 12 p.m. on Saturday due to Hurricane Irma.

The game was originally scheduled for a 7:30 pm kickoff.

Central Florida vs. Memphis — Moved to Friday at 6:30 pm

The game was originally scheduled for Saturday at 8 pm, but now will take place on Friday night and air on ESPNU.

UPDATE: Our @American_FB opener on Friday night will now air on @ESPNU. pic.twitter.com/QJNcajhODk

Florida International vs. Alcorn State — Moved to Friday at 7:30 p.m. at UAB

Florida International will still get to play on Friday night, but not in Miami. The team will travel to Birmingham, Alabama on Thursday and play Alcorn State University.

“We have decided to relocate a number of our teams to Birmingham, Alabama,” said FIU Executive Director of Sports and Entertainment Pete Garcia. “I want to thank UAB Director of Athletics Mark Ingram, the University of Alabama Birmingham and the Birmingham community for their tremendous help and assistance. The UAB family has gone above-and-beyond to make us feel welcome.”