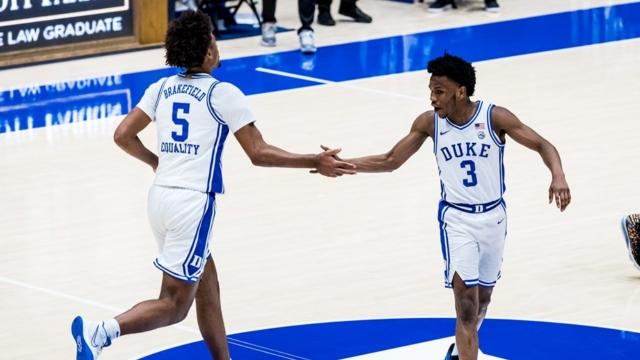 How college basketball's bluebloods got back on track, at least for one weekend

The loudest noise in college basketball over the weekend was a blueblooded roar. It was as if all the troubled marquee names sent a group text: We’re back. Or at least, we’re trying to be.

Take Duke. The Blue Devils went into Saturday fighting to stay above .500, and left with a 66-65 win over No. 7 Virginia, making a defensive Alamo of a last stand the final three minutes as if their season depended upon it. And it might have. The Cavaliers had five shots to change their fate and missed them all. Another ho-hum Duke-Virginia affair; five of the last seven meetings have been settled by one or two points.

“We needed this one badly,” said Matthew Hurt, who contributed 22 points. “The season hasn’t gone how we wanted it. There’s been a lot of negativity. We’re just going to try and not take everything for granted and try to keep getting better every day.”

FROM FEB. 11: Duke and Kentucky’s losing seasons, explained by some truly unusual numbers

Take Kentucky. Dismissed as hopeless when they were 5-13, the Wildcats have now won three in a row, including the big Saturday splash when they went to Knoxville and put a 70-55 whipping on No. 19 Tennessee. That matched the widest winning margin a John Calipari Kentucky team has ever had against a ranked opponent on the road. Aesthetics don’t count at this point for the Wildcats – 11th hour revival is the issue — so never mind the rather unsightly second half when both teams clanged away at a combined 23.6 percent. The lead kept growing, and in lots of Kentucky games, that’s been a problem.

“It was extremely important to know that we can do that,” Keion Brooks Jr. said. “We can build these leads and finally bury a team and put a team away. It felt good to be able to keep our foot on the gas pedal the whole time. We need to build on that and do that more often.”

Take North Carolina. Remember when the Tar Heels fell out of the rankings because they were having trouble shooting and scoring and generally running amok? Try 60.9 percent and 99-54 over rusty Louisville — positively Gonzaga-ish — with 71 of the points coming from freshmen. That last figure had had never happened in the history of North Carolina basketball, which is wow-worthy even if the Cardinals were coming off nearly a three-week COVID pause, and were several letters short of their A game.

“I’ve said all along I think our freshmen are going to be good players,” Roy Williams said. “My request is to do it during my lifetime.”

Take Kansas. The Jayhawks were recently evicted from the rankings for the first time in more than a decade. They’re 5-0 since, including Saturday, when they beat No. 15 Texas Tech 67-61.

“I’m leaving out of here feeling the best I have in a long time about this group,” Bill Self said.

Take Michigan State. A week before, the Spartans had been held to 58 points in a 30-point thrashing at home by Iowa, the worst loss Tom Izzo has ever endured. Saturday, they scored 52 in the second half to come from 13 points behind and blow by Indiana 78-71.

“I know it’s been a miserable stretch here,” Izzo said. “We kept grinding and we kept working at it.”

Five heavyweights, who made big news two weeks ago when none of them showed up in the Associated Press rankings. But now it’s seven days until March, and there are signs of . . . something.

Duke is 10-8 after three consecutive wins, with sophomore Hurt fully ablaze — 22.7 average, 75 percent shooting in those games — and a tweaked defense that is starting to display much improved communication skills, so the Blue Devils aren’t screened into oblivion as they sometimes were earlier. It seems rather bizarre, considering Mike Krzyzewski on the NCAA tournament bubble to be a promotion. But there he is.

“Over the last three games, we’ve emphasized defense and we’ve changed our ball screen defense,” he said. “It’s made a difference in us winning and losing. We have to keep going.”

Kentucky is 8-13, with new confidence, and the same long arms on defense. Tennessee shot only 32.1 percent in its own arena Saturday. The Wildcats have put away consecutive road games at Vanderbilt and Tennessee by making 41 of 45 from the free throw line. The young lineup combinations coming from the Calipari lab are starting to work.

“Even when they were playing bad, I believed in them. Even when individuals were so bad that it was scary, I believed in them,” Calipari said. “I don’t care about the record. I don’t even know what the record is. All I want to know is that we’re getting better . . . And you know what, this young group of inexperienced kids need us to be that way. But hold them accountable. You have to hold them accountable, or you’re not coaching.”

North Carolina is 14-7, led by an offense that is starting to hum with its new faces. It took 15 games for the Tar Heels to shoot 50 percent in a game. They have now done it four times in the past seven. They committed 16 or more turnovers in 19 games, but only 29 total in the past three. Williams said he has had to yell move at this team more than any he has ever coached, trying to get the freshman-heavy offense into the correct push-the-pace gear.

MORE: Tracking the undefeated teams in college basketball this season

“But I do think they’re understanding that a little bit more,” he said. “Gosh almighty, I think we’ve had 75 practices, you ought to be able to get some meaning across to them.” Now he can work on free throws. At last check, North Carolina was 314th in the country from the line and went 7-for-18 Saturday; the only dark cloud against Louisville. That, after Williams had each player shoot 300 free throws during practice last week, with nobody coming in under 79 percent. “I’ll try something else this week.”

Kansas is 17-7, back in the rankings and on a tear, winning by 12, 33, 14 and 18 points in the current streak, to go with the Texas Tech win. OK, the Jayhawks have been on a starchy diet with three of the get-well-quick wins over Kansas State and Iowa State – combined Big 12 record: 2-26 – but still. Clearly, being the team that busted the Jayhawk streak of 231 consecutive weeks in the polls struck a nerve. No more Mr. Nice Guy. “With a win like that, it definitely shows people we’re refocused,” forward Jalen Wilson said Saturday.

That would seem especially true on defense. Kansas has allowed only 56.2 points a game during the winning streak. “I think guys are taking more pride in it,” Bill Self said. “Guys are taking pride in what wins games, where I’m not sure that was the case in January.”

Michigan State, beset by injuries and COVID woes, is now 11-9, though still 11th in the Big Ten standings. The Spartans are starting to get sounder play at the point — an ongoing issue — and more fire from Aaron Henry, who scored 27 points at Indiana, which is only an hour down the road from his home in Indianapolis. Izzo said he has shrunk his playbook and just kept waiting for the roster to stabilize, while searching for daylight.

“We’re not stupid. We dug ourselves the hole of all holes. Some of it was given to us, some of it was situations, some of it was us. I’m just proud that nobody gave in. I think a lot of people out there were questioning whether they were quitting on anybody. That’s never going to happen here, and it didn’t happen here.”

So what now? Here is where it could get a little tricky.

Kentucky has already scratched its next game against Texas A&M because of Aggie COVID concerns. If Calipari doesn’t make any late schedule additions, the Wildcats have only Florida and Mississippi left to hone their new momentum for a run in the SEC tournament. But keep winning, and they’ll be the 10-13 team that nobody wants to play in Nashville.

North Carolina has Marquette this week, ACC leader Florida State Saturday, and Duke down the road. Duke could get some speed going with Syracuse, Louisville and Georgia Tech next, but there is now no margin for error. Eventually, the Tar Heels will be waiting in Chapel Hill for the final regular season game, and if the Blue Devils are still bubblish by then, they will absolutely, positively need to win. That’d be drama worthy of the rivalry, crowd or no crowd.

FAMILIAR TERRITORY: These conferences have sent the most teams to the NCAA tournament

Kansas lost at home to Texas by 25 shocking points in January. The rematch of that humbling is Tuesday in Austin. “I think they will see a different Kansas team than they saw in January,” Self said. Might Baylor see one, too? The Jayhawks earlier lost to the Bears by eight points – matching Baylor’s closest call all season — and will host them Saturday. That’ll be the Bears’ third game in five days, assuming they’re still unpaused. In other words, opportunity is audibly knocking this week for Kansas, who might yet have a chance to continue one of the sport’s more remarkable streaks: Being seeded no lower than No. 4 in 19 consecutive NCAA Tournaments.

Poor Michigan State has a closing stretch scarier than a lap swim through crocodiles. Starting Tuesday, the Spartans face six games in 13 days, four of them against teams ranked in in the top five. Illinois Tuesday, Ohio State Thursday and a final week two-game set with Michigan. A lousy scheduling break, for a team just trying to get above water.

“That’s just another excuse. We’re all going to go through something,” Izzo said.

Don’t these five know it.