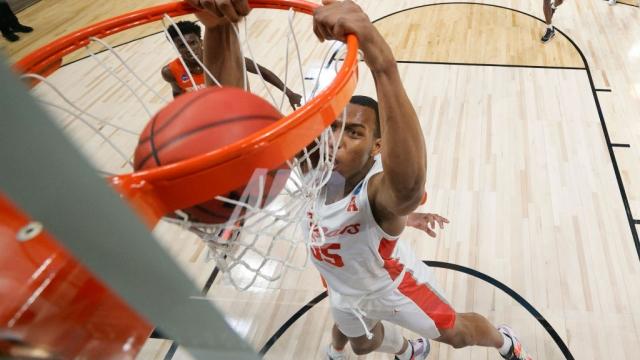 INDIANAPOLIS — The final basket of the opening half was an homage from Houston’s current men’s basketball team to the program’s all-time greats.

With 42 seconds on the clock, the Cougars’ Brison Gresham ran behind Syracuse’s zone on the baseline, rose above the rim and rocked a dunk off a lob from fellow senior DeJon Jareau.

While the players don’t have nicknames like “The Glide,” “The Dream,” “Mr. Mean” and the “Silent Assassin,” Houston’s 2020-21 squad has begun to take its place alongside the famous Cougars teams from 1982-84 that made up Phi Slama Jama.

Topping Syracuse 62-46 on Saturday at Hinkle Fieldhouse in a Midwest Regional semifinal, Houston (27-3) secured its first regional championship berth since Akeem Olajuwon led the program to the Elite Eight in 1984 on the way to a second straight national title game.

FOLLOW: Listen to every tournament game on Westwood One

Houston will face No. 12 seed Oregon State on Monday for the chance to advance to the program’s sixth Final Four. Each of the previous five times the Cougars made the Elite Eight, from 1967-68 and 1982-84 under coach Guy Lewis, they advanced to the next round of the tournament.

Houston’s control of Syracuse (18-10) inspired memories of the Phi Slama Jama dominance. The Cougars held the Orange to 20 points in the first half on 6-for-24 shooting that included 1 for 10 from 3-point range. Syracuse never led, and the smallest Orange deficit of the second half, four points, lasted just 21 seconds.

“We know we’re making history,” Jarreau said. “And like I’ve been saying, we are just approaching it as a business standpoint, just going out, executing our game plan and playing to the great culture that we have here.”

“I just told him that I’d do it for him.” ✊@UHCougarMBK’s DeJon Jarreau discusses playing for his close friend who suffered a brain aneurysm. #MarchMadness pic.twitter.com/QrNjQrKMvQ

Like the Cougars of the 80s, Houston attacked the rim — scoring off four dunks and six layups — and pulled down rebounds (40 total boards, 11 offensive) against the Orange.

This year, the Cougars ranked third in offensive rebounds per game at 14.45.

Syracuse won 92-87 against Houston at the Carrier Dome on Dec. 11, 1982. That Cougars team, featuring future Hall of Famers Clyde Drexler and Olajuwon, went on to lose to Jim Valvano’s North Carolina State squad in the national championship game. The following year, the Cougars fell to Patrick Ewing’s Georgetown Hoyas in the finals.

While there have been plenty of comparisons made between the squad from 37 years ago and the one today, Houston coach Kelvin Sampson said he wants this group to focus on the now.