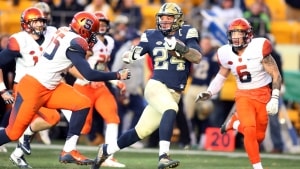 
When Georgia Tech coach John Heisman ran up a 222-0 score against Cumberland on October 7, 1916, college football records were still 21 years from being first recorded. As a result, that game — the most lopsided in college football history — isn’t officially recognized in them.

But there are still plenty of absurdly high-scoring games in the pages of the official college football records.

Here, we look at the top scoring game from every level of NCAA football, compiled from official NCAA record books:

In 2016, Syracuse averaged just 25.7 points per game, good for 90th place out of the 128 FBS teams. They’d been held to 9 points against Wake Forest earlier in the season, and combined for 34 points over the last three games — including a 54-0 shutout by No. 3 Clemson — heading into the final game of the season, at Pittsburgh.

The Orange got the ball first, and after an 11 play drive managed just 39 yards, they punted away. Pittsburgh went three-and-out, and punted right back. Then the floodgates opened. There were four touchdowns in 7 minutes, 14 seconds in the first quarter. Four more came in the second quarter, and five in the third. The fourth quarter had just seven full drives. Every one went for a touchdown.

The stats from the game are ridiculous:

A fun note to leave on: Pittsburgh scored more points in this game than the Panthers’ basketball team scored against Syracuse in three wins against the Orange the previous season.

Portland State quarterback Drew Hubel was expected to redshirt his freshman year, but was forced into the lineup after injuries thinned the Vikings’ roster. It sort of worked out.

Hubel completed 35 of 56 for 485 yards with no interceptions and nine touchdowns, which might go down as the best performance in a losing effort ever.

But Portland State only managed 17 rushing yards to Weber State’s 353, 225 of which came from Trevyn Smith.

Before this game, the most points by two teams at any level of NCAA football was from 1968, when North Park beat North Central 104-32 to combine for 136 points. Weber State and Portland State’s record would only stand  for two weeks, thanks to another game lower on this list.

In the weird world of sports, the two teams would play each other in basketball that season. The score? Weber State 73, Portland State 68,

The first drive of this game, by West Texas A&M, ended in a punt. Abilene Christian scored in three plays on the next drive. After another punt and a missed field goal, 11 straight drives to end the half ended with a touchdown or field goal.

Of the 31 total drives in the game, 22 were touchdowns and two were field goals. That’s 77 percent of the drives ending with a score. There were only four punts in the game.

The two teams combined for 64 first downs and 1,531 yards of offense.

Two weeks after Weber State and Portland State set the new NCAA record for combined points in a game, Hartwick and Utica faced off in a game that would go to four overtimes, and just barely edge out the record for most points in a NCAA game at any level.

After the two teams combined for 12 touchdowns through three quarters, Hartwick held a 49-42 lead with 3:14 left on the clock, and punted the ball back to Utica. The punt went just nine yards, and gave the Pioneers the ball on the 40-yard line. Two pass interference calls later and Utica had first and goal on the two. A touchdown with 17 seconds left would send the game to overtime, where the teams would trade six touchdowns before Utica failed a two-point conversion tie and lost the game.

In 2014, Rose-Hulman and Illinois College needed just three overtimes to reach the same score. That game saw the Fightin’ Engineers set a DIII record for first downs in a game (41), and the two teams break the combined first down record with 77. A combined 13 touchdown passes also set a new record.

Sophomore quarterback Austin Swenson went 37-for-60 with 603 yards and seven touchdowns to lead the Fightin’ Engineers to the win.