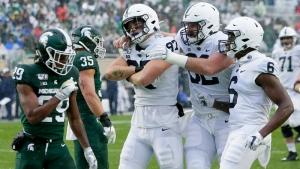 
There are only 8 undefeated teams left this college football season. That number might shrink again this week.

Here all are the remaining undefeated teams, starting with those ranked in the latest AP Poll Top 25.

That’s how many consecutive losses the Tigers have had against Alabama. This year’s meeting could be a No. 1 vs. No. 2 game. That is eerily similar to 2011, which is the last time LSU beat ‘Bama. That year, No. 1 LSU went to Tuscaloosa and beat the No. 2 Tide. This year’s game is in Tuscaloosa, too. And LSU might finally have the offense needed to get by Alabama, thanks to Heisman contender Joe Burrow.

Now the country waits to see how QB Tua Tagovailoa’s ankle injury heals. The big game against LSU is next, and Tua appears to be a game-time decision. The LSU game continues to look like the hardest game — and the game of the year in the sport.

We’re using “trap game” very lightly here. Ohio State has looked so dominant every single week, it might not matter what the Big Ten throws up against the Buckeyes. Still, the home game against Penn State stands out. The Nittany Lions have a big-play offense that could stand out and maybe push OSU for most of a game.

The big rivalry game is at Ann Arbor, but Michigan has a huge gap to make up if it’s to shock Ohio State.

The Nittany Lions are up to fifth in the polls, but the remaining schedule is a tough one. Though Penn State ended a recent stretch of issues against Michigan State with a 28-7 win, PSU still has undefeated Minnesota and undefeated Ohio State on the schedule.

No other game compares to the Nov. 23 showdown at Ohio State. It’s possible that will be a matchup between two 10-0 teams.

The Gophers’ rise is up to No. 13 in the AP Poll (and Coaches). Minnesota is also 8-0 for the first time since 1941…but gets Penn State next. With rival Wisconsin falling to Illinois and then losing to Ohio State, the home game against PSU looks like the biggest challenge ahead.

But even if Minnesota pulls the shocker against Penn State, it still has to play at Iowa and then gets the Badgers in the final game of the regular season.

It’s been a memorable season for the Mustangs, who are ranked for the first time in more than 30 years. To remain undefeated, SMU will have to win some really tough games.

Road trips to Memphis and Navy are still on the slate. Those two teams are a combined 13-2, with the Tigers No. 24 in the AP Poll.