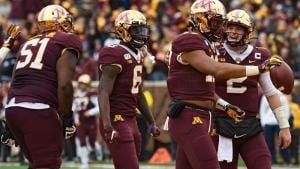 
There are only 5 undefeated teams left this college football season. Penn State and Alabama both lost in Week 11.

Here all are the remaining undefeated teams, starting with those ranked in the latest College Football Playoff rankings.

Ohio State has looked so dominant every single week, it might not matter what the Big Ten throws up against the Buckeyes. Penn State’s visit looked like the toughest remaining game, but that might now be different after the way things have gone lately.

Instead, rising rival Michigan could be the biggest hurdle on Nov. 30.

LSU ended its struggles against Alabama with an exciting 46-41 win. That stopped the series losing streak at eight and has the Tigers in lead position to play in the SEC Championship Game.

There are still three SEC games on the schedule, with Texas A&M on Nov. 30 likely the toughest game to go — at least before Atlanta.

Wow. The Gophers surged ahead and then held on to stun No. 4 Penn State, 31-26, to get to 9-0. Now the undefeated watch really picks up, though there are two tough games still ahead.

First up is a road game to Iowa. Two weeks later, Minnesota gets a visit from rival Wisconsin.