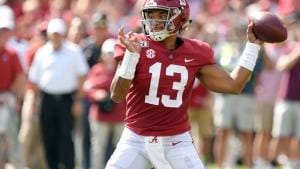 
We’re down to 12 undefeated college football teams this season. The Week 7 stunner of South Carolina beating No. 3 Georgia dropped the Bulldogs from the list.

So let’s have some fun. Here’s a look at the toughest home, road (or neutral) games for the 12 undefeated teams, with our pick for the toughest opponent remaining in bold. All rankings are from the AP Poll unless otherwise noted.

The good news if you’re Alabama is you’re not going to be an underdog. But that doesn’t mean a 12-0 record and a spot in Atlanta for the SEC Championship Game is fated.

If both Alabama and LSU remain undefeated, the Nov. 9 game in Tuscaloosa will probably get hyped as the “Game of the Year,” especially since the winner is likely headed to the SEC Championship Game.

Other than that, after the Tide won at Texas A&M this weekend, there aren’t many daunting games left on the schedule besides LSU and then the Iron Bowl at Auburn on Nov. 30. It probably is a two-game season for ‘Bama.

Clemson has dropped from its preseason No. 1 perch, but the Tigers might have the best chance of reaching the College Football Playoff. Wake Forest is the only ranked team left on the schedule — and the Demon Deacons come to Death Valley.

If Clemson misses out on the CFP semifinals for the first time since 2014, it could be the biggest shock of the season. If we have to pick one opponent to be the toughest, it’s rival South Carolina — especially now that the Gamecocks shocked Georgia.

There are two difficult home games left: Wisconsin and Penn State. Getting Penn State on Nov. 23 one week before going to rival Michigan could be trouble. Still, when your likely toughest remaining teams are coming to your place, it’s difficult to not be confident.

With Ohio State’s CFP troubles the last two seasons stemming from blowout road losses, the only one that looks even remotely possible to continue that streak is Michigan on Nov. 30. But OSU has lost only once to Michigan since 2003 (forfeit in 2010 and 40-34 loss in 2011).

There’s no debate here: Alabama. The Tigers also play Auburn this month, but the Nov. 9 date at the Tide is the big one.

LSU has lost eight in a row to Alabama, with the 9-6 OT defensive struggle in 2011 the most recent triumph. But since beating Alabama 24-21 in 2010, LSU has averaged 9.1 points per game against the ‘Tide. However, LSU might finally have the offense needed to win thanks to Heisman candidate Joe Burrow.

TV SCHEDULE: Game times and TV channels for the 2019 season

OU got by Texas this weekend in what was probably the toughest hurdle on the schedule. But because everyone in the Big 12 play everyone else, the Sooners still have to play the league’s other top teams.

That means the road trip to Baylor stands out from the rest, though the Sooners also visit rival Oklahoma State for Bedlam.

As dominant as RB Jonathan Taylor and the Badgers defense have looked most of the season, it might be tough for Wisconsin to be 12-0 going to Indianapolis. Most of that is because Wisconsin plays at Ohio State on Oct. 26.

But that’s not all. If the Badgers somehow escape Columbus with a win for the first time since 2004, November has four semi-tricky games: Iowa, at Nebraska, Purdue and at Minnesota. That last one stands out, at least right now. The Gophers are 5-0 and stopped the Badgers’ series winning streak at 14 with a 37-15 win in Madison to win Paul Bunyan’s Axe.

Ohio State handed Penn State its first loss in both 2017 and 2018. Any undefeated Nittany Lions season talk starts and ends with the Buckeyes. But that showdown is not until Nov. 23, with Rutgers the only team left on the schedule after that game.

So it might make more sense to focus on a possible trap game. Michigan comes to Beaver Stadium for a night game. Michigan State upset the Nittany Lions in each of the last two years. But PSU won’t be overlooking those two — so they they might not fit the “trap game” label. Instead, that trip to Minnesota two weeks before Ohio State game stands out.

The Broncos are the Group of Five’s top New Year’s Six candidate (with the AAC contingent right there, too). But the schedule isn’t easy.

After 4-1 Hawai’i this week, Boise State goes to BYU and Utah State. That Nov. 23 game at Utah State is probably the toughest, as the Aggies have QB Jordan Love and lost by only 9 on the Blue Turf a year ago.

Looking for a trap game, Wyoming makes the most sense. The Cowboys are 4-1 and upset an undefeated Boise State team in 2016.

POLLS: The Top 25 rankings for Week 7

SMU is ranked for the first time since 1986. The stay almost didn’t last long, as the Mustangs rallied from down 21 in the fourth quarter to beat Tulsa in 3OT. That proves this undefeated run won’t be easy.

But it might be difficult to stay on this list much longer. Week 8 foe Oklahoma State was ranked earlier this season, plus the game is in Stillwater.  Even if Baylor gets out of that stretch with wins, there are three consecutive weeks of TCU, Oklahoma and Texas to start November.

The Gophers are 6-0 after routing Nebraska, 34-7. But Minnesota still has to prove itself against a ranked team.

Still, 8-0 is quite possible for the Gophers. The problem is that Minnesota plays Penn State, Iowa and Wisconsin in November. Take your pick out of that lot, but Penn State might be the toughest out.

App State impressively drove 97 yards in 10:11 on 19 plays to win at Louisiana in Week 7 in likely the toughest conference game on the schedule.

But it’s the Mountaineers’ road game at South Carolina that is now the most likely stumbling block. Appalachian State beat North Carolina earlier this season.

The Mountaineers have a surprisingly deep history against South Carolina. They are 1-8 against the Gamecocks, winning 39-34 in 1975.