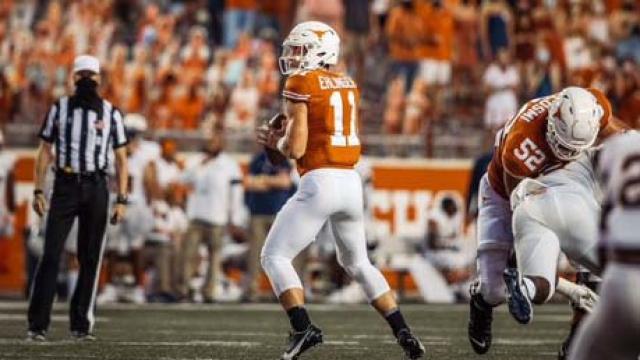 Here's how college football's 6 ranked teams did in Week 2


Week 2 of the 2020 college football season was the first to feature ranked teams. Clemson and Oklahoma headlined the six AP top 25 programs in action, with both dominating their season openers after reaching the College Football Playoff a year ago. But there was one notable upset.

Here’s what we saw from college football’s ranked teams this weekend.

Louisiana last beat a ranked team in 1996 and were 0-31 against top 25 programs on the road before Saturday. But the Ragin’ Cajuns got their first win in 32 tries when they shocked No. 23 Iowa State 31-14.  Defensive coordinator Patrick Toney made his UL debut with the task of slowing down ISU quarterback Brock Purdy and a Cyclones offense that averaged 32 points 444 yards per game in 2019.

The Ragin’ Cajuns held Iowa State to 303 yards while not giving up a play longer than 19 yards. Purdy completed under 50 percent of his passes and was intercepted by Asjlin Washington, one of two ISU turnovers. Louisiana may have been outgained 303-272 on Saturday, but the Ragin’ Cajuns didn’t need a traditional offense to win. Chris Smith opened the UL scoring by returning a kickoff 95 yards and Eric Garror later housed a punt from 83 yards out. Garror’s return came during a of 21-0 run that put coach Billy Napier’s team in control.

Rattler shines in debut for No. 5 Oklahoma

Spencer Rattler played only one half of football in his first start, but that was more than enough for the redshirt freshman to show why he just might be the Sooners’ next great quarterback. Fifth-ranked Oklahoma rolled 48-0 over FCS Missouri State with its new signal caller starting off red-hot. Rattler opened the game with 199 yards and three touchdowns, all before he threw an incompletion. OU raced out to a 41-0 lead as Rattler finished 14-of-17 with 290 yards and four scores before backup Tanner Mordecai played the second half.

Ehlinger on a mission for No. 14 Texas

It’s been over a decade since Texas won a Big 12 Championship. At a minimum, there’s an Oklahoma-sized obstacle in the Longhorns’ way in 2020. Through one game of the new season, quarterback Sam Ehlinger appears determined to take help the Longhorns take a step forward. No. 14 Texas opened its season with a 59-3 win over UTEP. The senior connected with Joshua Moore for a 78-yard strike on the first play from scrimmage. By halftime, Ehlinger had single-game career-highs in yards (424) and passing touchdowns (5). After losing his top two targets from a year ago, the Longhorns quarterback spread the ball comfortably, throwing touchdowns to five different players while finding nine different receivers throughout the game.

Quarterback Sam Howell led a textbook drive — 10 plays, 65 yards and a touchdown pass to Garrett Walston — on the first possession of No. 18 North Carolina’s 31-6 win over Syracuse. But neither UNC nor Syracuse would find the end zone again until running back Javonte Williams’ 1-yard plunge on the first snap of the fourth quarter, one of three North Carolina touchdowns in the period.

UNC piled up 463 yards and 31 points, comparable numbers to the team’s 2019 averages, but needed three quarters for the offense to find its rhythm. Saturday’s three giveaways and 91 penalty yards could become areas of concern, but the defense made up for it. The Orange were held to under three yards per play, finishing with 202 total yards of offense while converting on just 4-of-19 third downs. All six points for the visitors came from shortened fields off of turnovers.

Williams dazzles for No. 10 Notre Dame

The departure of Tony Jones Jr. left the Fighting Irish looking to replace the production of a three-year contributor to the offense and its leading rusher from a season ago. Kyren Williams received four carries in 2019 before stepping into the starting role Saturday. In No. 10 Notre Dame’s 27-13 win over Duke, Williams stole the show in his first career start. The sophomore established himself as the lead back, handling 19 carries for 112 yards and two touchdowns. But his impact didn’t stop there. Williams added 93 more yards as a receiver, leading Notre Dame with over 200 total yards of offense.

ICYMI Check out the one yard rush touchdown by @Kyrenwilliams23 to put the Fighting Irish on the board.

Business as usual for No. 1 Clemson

College football’s top-ranked team has never lost to an ACC opponent with Trevor Lawrence under center. The Tigers’ junior quarterback kept that unbeaten streak going on Saturday as No. 1 Clemson rolled 37-13 over Wake Forest. Lawrence didn’t miss a beat after an extended offseason, finishing with 351 passing yards and three total touchdowns while running back Travis Etienne added over 100 yards and a score on the ground.