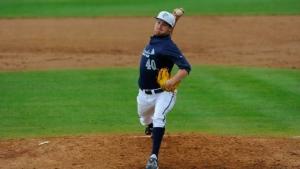 
October baseball is here and the MLB postseason is set to begin when the Milwaukee Brewers and Washington Nationals square off in the National League Wild Card game on Oct. 1 at 8:08 p.m. ET.

There will be four former DII baseball players on the national stage in that ballgame, joining 14 other alums of DII programs on the active rosters heading into the MLB playoffs. Let’s take a look at how the rosters breakdown this October.

COLLEGE BASEBALL STARS IN THE PLAYOFFS: Every former player in the 2019 MLB playoffs

DII baseball in the MLB playoffs: By the numbers

Before we get into the 18 former student-athletes, let’s go beyond the box scores and take a peek at some numbers.

0.00 — Former Colorado Mesa pitcher Sergio Romo’s career ERA in the three World Series he’s appeared in, so far. This is Romo’s fifth trip to the MLB postseason and first with the Minnesota Twins after being a key cog in the San Francisco Giants’ run.

2 — Schools with multiple players represented. Slippery Rock has a pair of players in Oakland A’s pitcher Lou Trivino and Nationals first baseman Matt Adams, while Nova Southeastern has a pair of pitchers in Oakland’s Mike Fiers and St. Louis’ Miles Mikolas. Fun fact: The two were teammates atop the 2009 Sharks’ rotation with the big-hitting J.D. Martinez giving them plenty of run support.

DII MLB DRAFT: Here’s what it’s like to be drafted while playing for the DII championship

4 — Consecutive trips Yan Gomes has made to the playoffs. The former Barry star and 2009 Sunshine State Conference player of the year made three-straight trips with the Cleveland Indians before joining the Nationals this year.

12 — Former DII pitchers on MLB rosters this October. There are three outfielders and one first baseman, second baseman and catcher making up the list.

18 —  Total players from current DII programs in the postseason. That’s up five from last season.

MLB postseason: The complete list of DII baseball players in the playoffs

Here are the former college baseball players by playoff team, listed by the school’s current affiliation in the DII. Positions and colleges were taken from MLB.com’s official active rosters at the end of regular season play on Oct. 1. We will keep tabs as playoff rosters are cut to 25 and update and note any changes, should they occur.