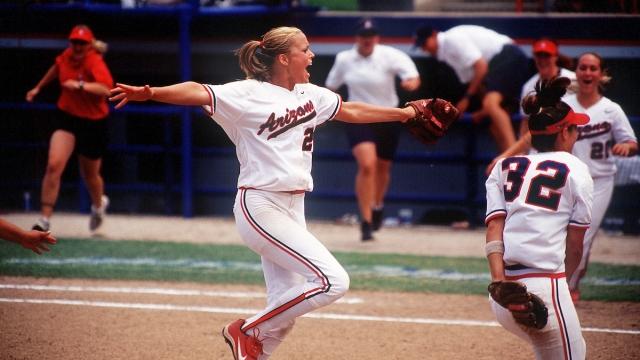 It’s been almost 40 years since DI college softball became an NCAA championship sport. In the time since, softball fans have been treated year in and year out to record-setting moments and legendary careers with some of those records continuing to stand in the present day.

That made us a little curious. Which records would be the hardest to break? I scanned the entirety of the NCAA record book — all 58 pages of it — and came up with nine milestones that we think are the most untouchable in the game. Take a look for yourself. If there’s another you think we should include, send us an email to let us know and why it should be added to this list.

The recency of Trautwein’s record lands her the first spot on this list. Only two other players had ever struck out 21 batters in a seven-inning game before Trautwein. Not only did she fan all 21 batters, but the North Texas pitcher also tossed a perfect game for good measure. She needed only 78 pitches start to finish and never faced a three-ball count. In fact, only three at-bats even got to two balls. Of her 21 strikeouts, 17 were of the swinging variety, including the first 10 batters as well as six of the final nine. There might not even be a term yet to describe Trautwein’s newly attained level of perfection. I guess we’ll settle for now by calling this performance pure dominance.

Disclaimer: Alabama’s Carrie Moreman owns the DI single-game hits record with eight. However, that was also a 19-inning game. Bondarenko and LaFornara get the nod here for racking up seven hits in seven innings each. You might be wondering how much offensive firepower goes into a games like these and that’s a fair question. The short answer is a lot. The long answer is 48 runs for Canisius in 1985 and 43 runs for Cornell in 1995. Bondarenko’s performance is noteworthy for its individual and team records. The Griffins’ NCAA records for single-game scoring and margin of victory are both intact. As for LaFornara, the Cornell star hit for the cycle with two doubles, a triple and a home run to complement a trio of base hits.

Just for context, the longest team winning streak in DI softball history belongs to Arizona. Those Wildcats won 47 straight games between the 1996 and 1997 seasons. Oh, and that was before Finch ever played in Tucson. Talk about a run of success. But Finch did something between her sophomore and senior seasons that no college pitcher has been able to replicate since: Win 60 consecutive games. She closed out her sophomore campaign with wins in her final eight games before dominating to the tune of 32-0, including a shutout win in the national championship as a junior. Finch won her first 20 decisions as a senior before the streak came to a close.

BEST OF THE BEST: College softball’s top 11 pitchers of all time

There’s minimal room for error in college softball, especially in the outfield. Fortunately for Georgia, Nicole Barber was about as sure-handed as they come. She played in 278 games for the Bulldogs, seeing 264 total chances during her career. Not only did she only make three errors in four seasons, she went a blistering 219 games in a row without an error. Barber was one of the first All-Americans in UGA history with her defensive reliability being a big reason why. Typically speed is an important part of playing in centerfield and Barber had plenty of it. She’s also the Division I leader in stolen bases with 257 career bags swiped.

Up next on the list is the longest game in DI college softball history, with a twist. The contest went 31 innings and lasted six hours and 25 minutes across two days but the craziest stat that we’re focusing on here is the number of pitchers each team used — one. Creighton’s Kelly Brookhart was the winning pitcher (and only pitcher) for the Bluejays in a 1-0 decision. She threw an astonishing 390 (!) pitches to get the win. Utah’s Janet Womack went the distance as well in the loss, matching Brookhart with 31 innings, though Womack threw “only” 320 pitches. Click or tap here for a box score from the game.

Only two players in DI softball history have put together a hitting streak of 40 games or more. Furman’s Cathy Fronheiser was the first during the 1993 season. Just before the final week of her 42-game streak began, Graziano started a streak of her own. The offseason served as an interruptor but the months away couldn’t cool Graziano’s bat to open the 1994 season as she’d set the record with a hit in her 43rd consecutive game. During the 1994 season, Graziano also set the NCAA record for the highest single-season batting average ever when she batted .589 with 103 hits in 175 at-bats.

Time for an equation. What do you get when you add Michele Granger and a piece of pitching rubber? The correct answer is the most no-hitters in NCAA history. Granger pitched in 183 games during her time at California with 119 wins and a career ERA of 0.46 while keeping the base paths clear like few other pitchers. The Golden Bears’ ace tossed an NCAA-record 25 no-hitters, including nine in one season, along with five perfect games. Throughout Granger’s career, more than 16 percent of her appearances were either a no-hitter or perfect game.

There’s seeing the ball well and then there’s getting on base in every plate appearance in six straight games. OK there’s probably a middle ground for that somewhere, but Amber Schisler was essentially an automatic baserunner towards the end of Campbell’s 2017 season. She reached safely in 26 straight plate appearances, which took place in six of Campbell’s final seven games. Not a bad way to close out your college career.

There were a number of memorable moments from Henderson’s senior year at UMass. You’ve got the 27 straight wins stretched over four months of the season and a Honda Award, which goes to the best player in college softball. However, the most eye-popping stat is her 105 consecutive scoreless innings. Think about that for a moment. If Henderson went the distance in each of those appearances, that’s 15 complete games without a run allowed. Henderson had 72 career shutouts at UMass and could have picked up close to 20 percent of them in six weeks.