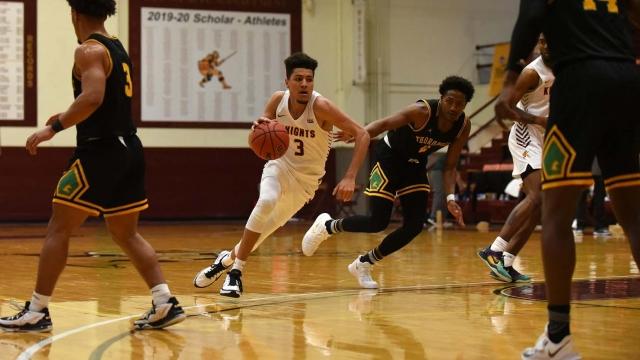 Six ranked teams. Three top-25 matchups. All in one day. Nothing more needs to be said.

Records and statistics are through Feb. 18.

The Railsplitters are reeling, having lost their last two games to unranked opponents. They were stunned by Newberry, 71-66, on Saturday, and then suffered their worst loss of the season against Tusculum, 90-74, on Wednesday. Lincoln Memorial fell four spots to No. 8 in this week’s NABC poll. A third straight defeat would all but guarantee another drop.

TOURNEY TIME: How the 2021 tournaments will work | Regional sites

Meanwhile, the Royals haven’t lost since that Feb. 3 meeting. They’re riding a four-game winning streak, and are 7-1 at home this season. Queens has the fourth-highest rebounding margin in the country at 8.9. Four Royals are grabbing more than five rebounds per game, including sophomore forward Gavin Rains. He’s averaging a team-high 8.5 boards per game.

Coincidentally, Lincoln Memorial is right behind Queens in rebounding margin. The Railsplitters are securing 8.8 more rebounds per game than their opponents. Jordan Guest leads the team in rebounding with an average of 7.1. This contest could very well come down to which side wins the battle on the glass.

It’s unusual to see two undefeated teams meeting in the middle of February. But a season of uncertainty and postponements have brought us here.

The ninth-ranked Lakers lead the country in four statistical categories: scoring defense, scoring margin, steals per game and turnover margin. They’re limiting teams to just 54.6 points per game, while simultaneously outscoring them by an average of 31.1. Mercyhurst is coming away with 11.3 steals per game and commits 10.1 fewer turnovers than its opponents, on average.

The Golden Knights will be tested like never before. But offensively, they’ll have the advantage on the perimeter. Gannon is shooting 42.9 percent from beyond the arc this season. That ranks third in the country.

For as stingy as the Lakers’ defense is, they’re allowing opponents to shoot 36.1 percent from the outside. Mercyhurst will have its hands full trying to defend Gannon’s outside shooting attack of Ike Herster (47.4 percent) and Chris Clancy (43.5 percent).

Welcome to the main event. Colorado School of Mines has yet to relinquish its No. 1 ranking this season. Barring an upset at the hands of Westminster (UT) on Friday, the Orediggers will enter Saturday’s contest against No. 7 Colorado Mesa with an unblemished record.

Basketball fans are in for a great one, although the Mavericks’ faithful should have some antacid tablets on hand. Four of Colorado Mesa’s last five wins have come in overtime. Two of its wins this season have been in double overtime. But give the Mavericks credit. They’re 5-0 in games that’ve gone past regulation.

THE DII REPORT: New men’s basketball Power 10 rankings and a trip around the diamond

But the Orediggers’ bread and butter is still their defense. They’re holding opponents to an even 62 points per game. That’s tied with Miles for the fourth-lowest scoring defense in the country. Colorado Mesa will have to overwhelm that unit in order to knock the top-ranked team off its perch.