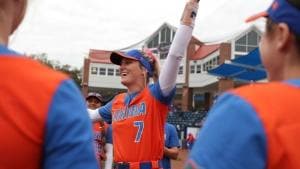 Here are 12 takeaways from Friday's slate of college softball


There was plenty of action around the college softball diamond on Valentine’s Day. Let’s take a look at what stood out.

1. Top-ranked UCLA showcased its pitching and power to beat No. 8 Alabama 7-0 at the St. Pete/Clearwater Elite Invitational. Megan Faraimo threw a two-hit shutout while junior Briana Perez and graduate senior Jenavee Peres hit home runs for the Bruins. Peres, the mother of a nearly 2-year-old son, was making her UCLA debut.

ALL-TIME LINEUP: The best UCLA players at every position

2. Kelley Lynch. The freshman hit a three-run home run and threw 5.1 of scoreless ball in No. 2 Washington’s 7-0 victory over No. 5 Florida State in Clearwater. Lynch became just the second Husky freshman ever to hit a home run and earn a shutout win. The Huskies, who played without All-American shortstop Sis Bates again, bounced back from a run-rule loss to Alabama on Thursday.

3. JMU opened the season a week later than most, but did so in style with a 6-0 victory over No. 17 Texas Tech in Clearwater. Oddici Alexander picked up the win, tying a career-high with 12 strikeouts and allowing just two hits and one walk.

4. No. 6 Texas scored three runs in the bottom of the seventh to rally and beat No. 25 Utah 3-2 at the Puerto Vallarta Challenge. The Longhorns got back-to-back solo home runs by Kaitlyn Slack and Reagan Hathaway to tie the game before UCLA transfer Colleen Sullivan ended things with a walk-off double.

And the final walk-off moment of jubilation! BIG HIT COLLEEN!

5. No. 13 Michigan (7-0) remained undefeated with two wins in the ACC/Big Ten Challenge, including a 4-3 victory over host No. 22 North Carolina. Alex Storako earned both wins, recording 22 strikeouts and allowing six hits in 10 innings.

6. No. 16 Missouri (8-0) continued to thrive. The Tigers remained undefeated with two one-run victories, including a 3-2 win over No. 9 Oklahoma State in eight innings. Mizzou plated three runs in the final two winnings, with Imani Myint scoring the game-winning run from third on a wild pitch.

7. Oklahoma junior Jocelyn Alo belted two, 2-run home runs to lead the Sooners to an 8-3 win over Bryant at the Hillenbrand Invitational.

8. Definitely not a pitcher’s dual. Kentucky and Boise State staged an offensive slugfest that lasted three hours with Kentucky holding on for a 16-14 victory at the Littlewood Classic. The teams combined for 31 hits, including 17 extra base hits. They each used four pitchers.

WCWS PREDICTIONS: A way-too-early look at 8 for Oklahoma City

9. No. 18 Georgia (8-0) remained undefeated with victories over Kansas and No. 24 Northwestern. Seniors Ciara Bryan had two home runs and four RBIs on the day. The Dawgs have their biggest test of the young season on Saturday against No. 1 UCLA.

10. Hope Trautwein ties the program single-game strikeout record (14) in North Texas’ home opener against Creighton. Trautwein was named as D1Softball’s preseason Conference USA Pitcher of the Year. She moves to 28 strikeouts on the year.

12. Auburn roared back to score eight unanswered runs and beat a one-win UNC-Wilmington team 8-7 in 10 innings at the Plainsman Invite. The Tigers trailed 7-0 after two innings in a game they couldn’t afford to lose considering their shaky start to the season.

Bonus: Grab a box of tissues. Holly Rowe’s postgame interview with UCLA’s Jenavee Peres will have you in tears.

“I almost cried a little bit because I was thinking of my son…everything I do is for him.”

After having a baby in 2018, Jenavee Peres didn’t think she would play softball again. Today, she got her first hits – including a homer – for @UCLASoftball.#NCAASoftball pic.twitter.com/o6y8TTmiUR