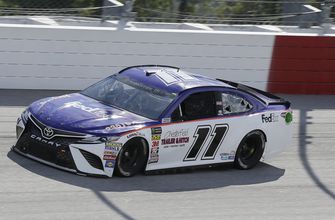 Hamlin looking to his Darlington touch for NASCAR playoffs

DARLINGTON, S.C. (AP) — About the only time Denny Hamlin’s had difficulty at Darlington Raceway came when he was trying to impress the brass at Joe Gibbs Racing.

He and Tony Stewart tested at the track “Too Tough To Tame” about 15 years ago and Hamlin remembers tagging the infamous and troublesome wall some 19 or 20 times, “where we didn’t have any sheet metal on the side and had worn completely through,” he said.

“Since that point, it just kind of clicked.”

Hamlin, now a mainstay at JGR, needs his Darlington touch to click once more at the Southern 500 on Sunday night. Hamlin has not won on the Monster Energy NASCAR Cup Series since taking the checkered flag here a year ago. He’s on the verge of qualifying for the playoffs — he needs eight points out of the weekend to clinch a spot with only one regular-season race remaining after this — but sorely wants to enter running at peak performance.

He’s off to a good start on the weekend by winning the pole Saturday for the Southern 500. Kyle Larson will start next to Hamlin, with last year’s series champion Martin Truex Jr. in third.

Hamlin has won twice here on the Cup side and five times in Xfinity. More amazingly, he’s never missed a lap at Darlington as Cup driver.

“That’s called a jinx, thank you,” Hamlin answered when told of his success here.

Hamlin could use a bit of a jinx put on the trio of NASCAR champions dominating victory lane. Kevin Harvick, the 2014 champion, leads the way with seven wins, while 2015 champion Kyle Busch has six. Defending series winner Martin Truex Jr. has won four times this season, meaning the three have combined to take 70 percent of the races.

Busch said his mission and mindset is clear: finish the regular season as the top playoff seed.

“We want to continue our dominant stretch, continuing to win races, top fives and add to those bonus points,” he said. “You want to win the regular season.”

Some drivers, like Hamlin, simply want to make the playoffs. Hamlin appears likely to clinch his spot this week, while Aric Almirola and seven-time champion Jimmie Johnson are also close to making the 16-team postseason.

The matter will be settled for sure next week when the 26th and final regular-season race takes place at Indianapolis Motor Speedway.

“Running better is very, very important to us at this point. So we’re doing everything we can to work hard and get to that level we want to be at,” he said. “Winning one of these next two would, for sure, help with the momentum going into the playoffs.”

Hamlin swept both Darlington races a year ago, then a few days later had his Cup victory “encumbered” when his No. 11 Toyota did not pass post-race inspection. Hamlin lost five playoff points and crew chief Mike Wheeler missed two races for the violations.

A year later, Hamlin said the infraction was “so small, it had no bearing on the finishes. Previous wins that I’ve had validated that.”

Hamlin put a personal twist on his race car during Darlington’s yearly throwback weekend as the track honors seven decades of NASCAR. Hamlin’s car will look like the one Hamlin drove in 1997 at the Virginia speedways where he cut his racing teeth.

Race teams throughout the garage have jumped into the past with fan-familiar schemes harkening back to some of NASCAR’s greats. Austin Dillon will drive a gray No. 3, similar to the one the late Dale Earnhardt drove in the 1995 All-Star race. William Byron’s No. 24 will look like Jeff Gordon’s old rainbow machine. And Kurt Busch will drive a Stewart-Haas car made up like the Rubbermaid machine he was in 15 years ago when he and Ricky Craven went door to door and fender to fender down the stretch in Darlington’s spring race as Craven won by 0.002 seconds — the closest finish in NASCAR history.

Hamlin is focused on finding a late-season push to carry his team into the playoffs.