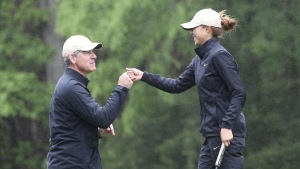 “GOLF continues to invest in college golf and showcasing the game’s future stars through our long-term partnership with the NCAA,” said Molly Solomon, GOLF executive vice president of content and executive producer. “During the next two weeks, viewers will witness the passion and intensity demonstrated by these student-athletes have in competing for national championships, many of whom are continuing to raise their profiles through our year-round college golf coverage.”

Both the NCAA Women’s and Men’s Golf Championships will connect 14 consecutive days of live tournament coverage on GOLF. In total, GOLF will air more than 50 live tournament hours of college and amateur coverage in 2019, the most of any television network.

Tickets are being punched across the country! @RyanLavnerGC and @ChantelMcCabeGC have the latest from #NCAAGolf Men’s Regionals in this @Topgolf Update. https://t.co/yA8eRPURnE

NCAA GOLF CHAMPIONSHIPS COVERAGE: GOLF’s live tournament coverage of the NCAA Women’s Golf Championships begins on Monday, May 20, when an individual national champion will be crowned and coverage will begin tracking the schools attempting to qualify for the eight-team match play championship. GOLF coverage on Tuesday and Wednesday, May 21- 22 will include all three rounds of the team match play, ultimately crowning a national champion. Coverage days and times will be duplicated the following week (May 27-29) for the NCAA Men’s Golf Championships. Golf Central will surround live tournament coverage both weeks with pre- and post-event news produced on-site at the Blessings Golf Club, along with daily news updates on Morning Drive.

DIGITAL AND SOCIAL COVERAGE: GOLF Digital will feature expanded editorial coverage of the NCAA Women’s and Men’s Golf Championships from its team of writers via College Central, GOLF’s online home for college golf. Coverage will include scoring updates, features, analysis and reaction throughout the two weeks. Ryan Lavner and Brentley Romine will contribute on-site at the Blessings Golf Club.

MEN’S REGIONAL CHAMPIONSHIPS COVERAGE: Today (Wednesday) GOLF will deliver live digital updates on the NCAA Men’s Golf Regional Championships, hosted by Chantel McCabe and Ryan Lavner, which will track the teams that qualify for the NCAA Men’s Golf National Championships. Digital updates will post on @GOLFChannel on Twitter and online at GOLF Digital.

ANNIKA AWARD AND HASKINS AWARD WINNERS TO BE ANNOUNCED ON GOLF CENTRAL TUESDAY, JUNE 4: GOLF will announce the winners of two of the most prestigious awards in college golf – the ANNIKA Award and Haskins Award, both presented by Stifel – live on Golf Central, Tuesday, June 4 at 6 p.m. ET. The show will include profiles on the top candidates for the awards and live interviews with the winners, who also will receive an exemption to compete in the Evian Championship and A Military Tribute at the Greenbrier, respectively. The ANNIKA Award and Haskins Award honor the nation’s most outstanding female and male Division I collegiate golfer as selected by their peers, coaches and the golf media.

The East Lake Cup, taking place in late October at historic East Lake Golf Club, will feature the top-performing teams from the 2019 NCAA Women’s and Men’s Golf Championships. Invitations for the field will be extended to the semifinalists of the team match play rounds at both championships. Modeled after the NCAA Golf Championships, the format for the East Lake Cup consists of an opening round of stroke play to crown an individual male and female champion and to determine seeding for the following two days of match play competition. GOLF will air exclusive live coverage of the competition.

PLAYING LESSONS WITH JENNIFER KUPCHO TO PREMIERE ON GOLFPASS:

.@matthew_wolff5 of @OSUCowboyGolf placed tied for 18th at the Louisville #NCAAGolf Regional with a 54-hole score of 212 (-1). He completed his award season with 5 wins, 8 top-10s, 11 top-20s and a 68.58 scoring average. #HoganFinalists pic.twitter.com/CODeZnYNZo

GOLF also televises the Western Intercollegiate presented by Topgolf, one of the longest running college tournaments in the U.S. The 73rd edition was contested April 15-17 at Pasatiempo Golf Club in Santa Cruz, Calif., with Stanford sweeping the individual and team titles. The East Lake Cup, created by GOLF and East Lake Golf Club, is a three-day championship that invites the eight semifinalists from the previous NCAA men’s and women’s golf championships. Hosted at historic East Lake Golf Club in Atlanta, Ga., the competition benefits the East Lake Foundation. In 2020, GOLF will televise the Maridoe Collegiate Invitational, a new 54-hole team and individual stroke place college championship. In addition, GOLF deploys its comprehensive portfolio of news, digital and social media coverage year- round in covering collegiate golf, including specials for regional and national qualifying, on-site and wraparound news from golf’s biggest college events, and year-end award shows for the Haskins and ANNIKA Awards presented by Stifel.