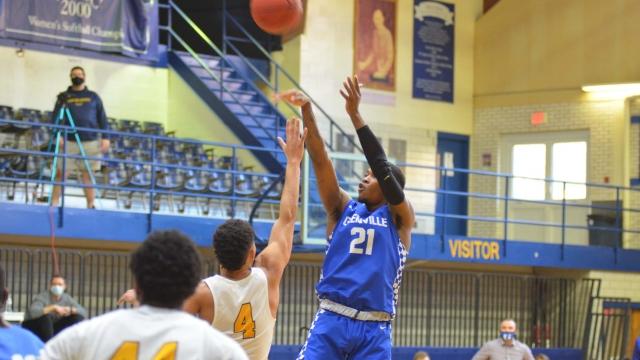 If you like scoring, you’ve come to the right place.

This week’s DII men’s basketball all-stats team not only features the nation’s top scorer, but the highest single-game point total of anyone in college basketball this season. Buckle up.

Note: All games played through Sunday, Feb. 14, were taken into account.

Alphonso Willis finished with 31 points, 10 assists, seven rebounds, four steals and two blocks in the Mountain Lions’ 88-83 win over North Georgia on Feb. 13. The senior shot an efficient 13-of-22 from the floor in just over 35 minutes of action. Willis, who nearly recorded a triple-double, posted multiples in the five major statistical categories. While his 31 points were the lowest for anyone on this list, he easily had the best all-around performance of the bunch.

David Simental’s 48 points on Feb. 13 were the most ever for a CSU Pueblo player in a single game. He broke the previous record of 46 set by Damon Williams on Jan. 24, 1997. The redshirt junior shot 14-of-20 from the floor, 5-of-8 from deep and 15-of-16 from the free-throw line. He also added two assists and one rebound while playing the entire game, which included 40 minutes of regulation and five minutes of overtime.

It was Senior Day for Barton this past weekend, and Isaiah Reddish posted a career-high 40 points on 13-of-22 shooting to celebrate. The guard grabbed a game-high 13 rebounds while adding five assists and one block in the Bulldogs’ 92-83 win over Erskine on Feb. 13. Reddish went 13-of-16 from the free-throw line, and moved into ninth place on Barton’s all-time scoring list. Fortunately, he didn’t have to say goodbye to Wilson Gymnasium just yet. Barton’s last two games of the regular season are at home.

This next performance was one for the ages. John Williams scored a career-high 52 points on 19-of-24 shooting, including 9-of-13 from deep, in the Pioneers’ 131-104 victory over Frostburg State on Feb. 8. Those 52 points are the most for any player in college basketball this season, regardless of division or gender. It’s also the second-highest single-game scoring total in Mountain East history. Williams needed just 32 minutes of play to tie Glenville State’s program record. He added seven rebounds, one assist and one steal.

Our final member of the all-stats team was a one-man wrecking crew in not one, but two games last week. Andrew Sischo dropped 42 points on 16-of-25 shooting while adding 17 rebounds, two steals and one assist during Daemen’s 93-86 victory over Roberts Wesleyan on Feb. 8. The senior center also shot 10-of-11 from the free-throw line. Just two days later, Sischo finished with 31 points, 21 rebounds, two blocks and one assist in the Wildcats’ 102-77 win over D’Youville. The redshirt senior currently leads the country in scoring at 29.8 points per game.