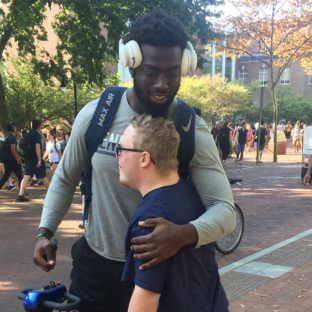 Penn State has one gift-giving super fan walking around campus these days.

After Penn State redshirt junior Torrence Brown sustained a season-ending knee injury, one dedicated fan sought out to lift his spirits after hearing about the injury.

Zack Williams, who is part of Penn State’s LifeLink program, decided to gift Brown with chocolate chip cookies as a pick-me-up after he was carted off the field during the Nittany Lions’ game at Georgia State during Week 3.

Zack found out @tbrown_19 hurt his knee and told me he wanted to get him a little get well soon gift to cheer him up. Reaction: Priceless pic.twitter.com/x7zpGuZIN5

According to their website, LifeLink provides State College Area School District special needs students, ages of 18 through 21, a chance to interact with students their age in “an environment that is socially and academically conducive to continued growth.”

Brown certainly appreciated the thoughtful gesture and tweeted his gratitude toward one of Penn State’s biggest fans.

My man Zack really made my day!! Really enjoyed the cookies!! Made me feel a lot better https://t.co/8mR5xtmlea

Zack’s kindness was also recognized by Penn State head coach James Franklin, who invited him to a Nittany Lions practice. During his visit, Zack showed off his cool dance moves and challenged safety Marcus Allen to a battle.

GameDay traveled to State College this weekend for Penn State’s matchup against Michigan.