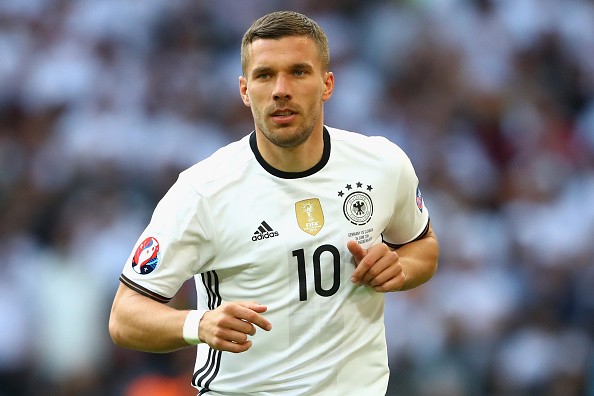 Lukas Podolski of Germany looks on during the UEFA EURO 2016 round of 16 match between Germany and Slovakia at Stade Pierre-Mauroy on June 26, 2016 in Lille, France. (Photo : Alexander Hassenstein/Getty Images)

One of the biggest matches in this week’s international break is the friendly game between rivals Germany and England. The Three Lions will visit the Westfalenstadion on Wednesday, March 22 in Dortmund. The match is also the final game for Lukas Podolski, who will retire from international competitions.

Where to Watch Germany vs. England

According to Goal.com, the Three Lions won the last Germany vs. England match, 3-2, last year that was also an international friendly. Die Mannschaft, on the other hand, defeated their rivals 4-1 back in their last competitive matchup in the 2010 World Cup.

The Germany vs. England match will also be the 130th and final match for Lukas Podolski as a member of the national team. The 31-year-old forward has a total of 48 goals for his nation and he was part of the 2014 FIFA World Cup-winning roster.

As for injuries, the Germans will not have Manuel Neuer after suffering a muscle injury over the weekend. The Three Lions are more riddled with injuries. They going to be without Harry Kane and Jordan Henderson.

Prediction: The Germans are motivated to get the win for Lukas Podolski to cap off his international career. The game will be his 130th cap, which is good for third behind Lothar Matthaus and Miroslav Klose. Germany beats England 3-1.