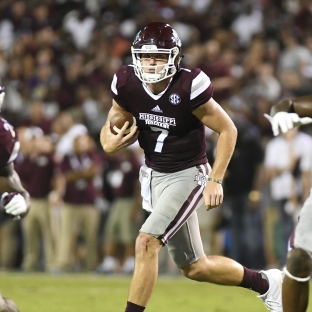 ATHENS, Ga. — The Georgia Bulldogs have not fared well in limited opportunities against Southeastern Conference quarterbacks who have rushed for 1,000 yards in a single season.

They will get another chance Saturday night with the arrival of Mississippi State and Nick Fitzgerald. A 6-foot-5, 230-pound redshirt junior, Fitzgerald rushed for 1,375 yards last season and has amassed 240 through three games this year.

“I think this is a huge challenge,” Georgia junior inside linebacker Roquan Smith said. “They pride themselves on running the ball, and we pride ourselves in stopping the run. He can actually throw it and run the ball, so he is an awesome guy and an awesome athlete.”

Georgia lost 14-0 to Auburn in 1963, when Jimmy Sidle became the first SEC quarterback to surpass the rushing milestone with 1,006 yards. In 2010, the Bulldogs lost 49-31 to Auburn and Heisman Trophy winner Cam Newton, who racked up 1,473 rushing yards for that season’s national champion.

Texas A&M’s Johnny Manziel rushed for 1,410 yards in 2012 on his way to the Heisman, but the Bulldogs and Aggies have yet to meet since A&M entered the league.

Fitzgerald, who set SEC single-season records last year for average yards per carry by a quarterback (7.1) and 100-yard rushing games by a quarterback (eight), is from Richmond Hill, Ga., which is 20 minutes from Savannah.

TDs responsible for through 1st 16 Starts at Mississippi State:

“When it came time to get recruited, I went to every Georgia camp I could,” Fitzgerald said this week in a news conference. “It would’ve been awesome, and I would’ve loved it. They just didn’t want me. At that time, there was no ‘Oh, poor me.’ It was just ‘Move on.’

“I knew I could play quarterback in college, and Dan Mullen and Mississippi State gave me that opportunity. I’m really, really happy I came here, and it obviously worked out well because this is the best fit for me by far.”

College football: How teams can lose at home and still win a national title

After last season’s 55-20 drubbing of Ole Miss in which Fitzgerald accounted for five touchdowns and rushed for 258 yards, Mullen was asked what school he landed Fitzgerald over and playfully shouted, “UT-Chattanooga!”

Fitzgerald is the reigning SEC offensive player of the week after racking up 180 passing yards, 88 rushing yards and four touchdowns in last Saturday’s 37-7 dismantling of LSU, but will he be distracted or emotional during his first career college game in his home state?

“Hopefully, he’s OK to handle it,” Mullen said. “I’ll see if he looks weird or gives me silly looks. He better get his emotions in check because we’re playing a very athletic defense. Watching the film will straighten out those emotions pretty quickly.”

Georgia indeed has been dominant defensively so far this season, allowing 71 rushing yards per game and 2.3 yards per carry. The Bulldogs subdued the run-heavy duo of Appalachian State and Notre Dame, holding Irish quarterback Brandon Wimbush to a lone net yard on 16 carries.

The 6-1, 228-pound Wimbush had a long run of 8 yards against Georgia, which was his team’s longest rush as well.

“I think Wimbush and Nick are very different,” Georgia coach Kirby Smart said. “Nick is a unique quarterback with his length, so he has the ability to see over you. He’s a lot faster than you think, deceptively. Wimbush had a little bit more quick twitch, but this kid is long and fast. You see him running away from SEC defenses.

“You didn’t see that with Wimbush. They didn’t play SEC defenses. This guy has gone up against the kind of defenses we’ve had repeatedly.”

Bulldogs redshirt sophomore safety J.R. Reed admitted this week that the Bulldogs are not lacking for confidence in stopping running quarterbacks but used “a different beast” to describe Fitzgerald.

“He’s a lot bigger guy who can throw it better than Wimbush,” Reed said. “He wants to run you over. He’s almost like a running back sometimes.”

And what about the challenge of bringing down such a sizable quarterback?

“At the end of the day,” Smith said, “the bigger you are, the harder you fall.”

Smart was asked following Tuesday’s practice whether Jacob Eason will reclaim the starting quarterback role from Jake Fromm once Eason is cleared to play.

“I don’t know if that’s a fair question,” Smart said. “I think the question is, ‘What is cleared to play?’ Is that 100 percent healthy or is that emergency backup? I think a lot of that is determined by how Fromm is playing.

“We’ll make that decision when the time comes. It’s not like we’re going to sit here and make an ultimatum. It’s going to come as his health improves.”

Smart said Eason, who sprained his knee midway through the first quarter of the Appalachian State opener, did some dropping back and threw the ball in Tuesday’s two-hour workout.

Senior cornerback Malkom Parrish, who has yet to play this season due to a broken bone in his foot, did 30-40 percent of his normal workload Tuesday, according to Smart. … Mullen on MSU’s schedule: “It looks like we’re going to end up playing the top two teams in the East — Georgia and Kentucky.”

This article is written by David Paschall from Chattanooga Times Free Press, Tenn. and was legally licensed via the Tribune Content Agency through the NewsCred publisher network. Please direct all licensing questions to legal@newscred.com.