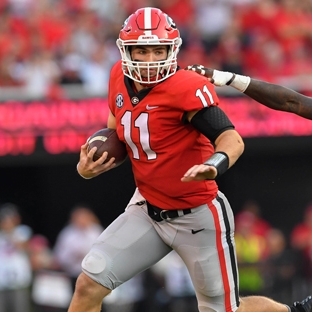 ATHENS, Ga. — Defensive coordinators preparing to face AP-ranked No. 2 Georgia have something else to worry about.

When loading the box to stop the Bulldogs’ deep and productive corps of tailbacks, defenses must respect freshman quarterback Jake Fromm as a threat for more than handoffs.

Fromm made the Georgia offense look almost balanced in Saturday’s 24-10 win over South Carolina. The Gamecocks stacked the line in an attempt to contain the running game led by Nick Chubb and Sony Michel, and Fromm took advantage of the openings by passing for 196 yards with two touchdowns.

“I knew he could throw the ball,” said receiver Javon Wims, who had five catches for 46 yards, including a 10-yard touchdown catch. “We throw as much as we run in practice. We all know he can throw the ball.”

The statement from Fromm will be important in bigger games ahead, including next Saturday’s visit to No. 10 Auburn and the Southeastern Conference championship game. Georgia (9-0, 6-0 SEC, No. 1 CFP) clinched the SEC Eastern Division title with the win over the Gamecocks and Mississippi’s win over Kentucky.

Fromm was efficient as he completed 16 of 22 passes and did not throw an interception. His highlight was a 20-yard scoring pass to Mecole Hardman.

MORE: No. 3 Irish, No. 7 Hurricanes soaring into rivalry game

The timing was especially important one week after he completed only 4 of 7 passes for 101 yards in a 42-7 rout of Florida, making the Georgia offense look unbalanced.

The timing also must have been satisfying for Fromm a few days after South Carolina defensive back Chris Lammons said the Bulldogs “can’t pass.”

“We really don’t pay attention to it,” Wims said. “We all know in our group that we can throw the ball. We’re just so dominant running the ball we don’t have to.”

Georgia does not make freshmen, including Fromm, available for interviews.

Georgia had 53 carries for 242 yards against the Gamecocks. Chubb had a season-high 20 carries for 109 yards. Michel scored on an 8-yard run after taking a direct snap. The final block that cleared Michel’s path to the end zone was delivered by Fromm.

“For what he does, he’s doing a great job,” Michel said of Fromm. “We can’t be focusing on what the outsiders say…At the end of the day we’re going to have his back.”

Entering the game, Fromm ranked second in the SEC in passing efficiency at 171.9. He has 15 touchdown passes with only four interceptions.

Jacob Eason won the starting job in the preseason. Fromm may have been headed for a redshirt year before Eason hurt his knee in Georgia’s opener against Appalachian State. Eason has returned and has played in three games as a backup. Fromm has kept the starting job.

“The RPOs, those were actually runs,” Smart said. “They weren’t letting us run the ball so he opted to throw.

This article was written by Charles Odum from The Associated Press and was legally licensed through the NewsCred publisher network. Please direct all licensing questions to legal@newscred.com.