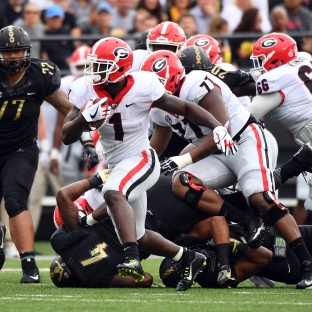 NASHVILLE, Tenn. — Georgia coach Kirby Smart challenged his offensive linemen, reminding them of how the Bulldogs managed a measly 75 yards against Vanderbilt a year ago.


Not only did they respond, the offensive line earned a game ball for a dominating performance that paved the way for the Bulldogs’ best rushing game in 30 years. And just maybe, they also found the mashing, mauling style that can take Georgia back to the Southeastern Conference championship game for the first time since 2012.

“There’s just holes everywhere,” senior running back Nick Chubb said after Georgia rolled up 423 yards Saturday in a 45-14 win over Vanderbilt. “I think it really relates to the mindset. We came in knowing that we weren’t great last year running the ball, and everyone bought into it. Everyone worked hard in the offseason, and it’s starting to show and pay off.”

The Bulldogs, who moved up a spot from No. 5 in the new AP poll Sunday, put on a show behind left tackle Isaiah Wynn, left guard Kendall Baker, center Lamont Gaillard, right guard Solomon Kindley and right tackle Andrew Thomas. Kindley started for the third time in the past four games.

They also believe they can be better.

“We know that we got a lot of room to make improvement,” Gaillard said.

Behind their blocking, Georgia averaged 7.8 yards per carry. The 423 yards wound up as the sixth-best rushing performance in school history. It was the most yards on the ground since Georgia piled up 454 yards in 1987 against Vanderbilt.

Georgia simply smothered Vanderbilt piling up 172 yards in the third quarter, and the Bulldogs held the ball for nearly 10 minutes.

“Our line was getting great push up there, and everything was opening up for us,” said Chubb, who finished with 138 yards and two touchdowns.

The linemen earned a game ball for helping Georgia start 6-0 for the first time since 2005 when they won their first seven games. This is the Bulldogs’ first six-game winning streak since 2012. Smart said his linemen were physical and overpowered Vanderbilt.

“Our backs and our o-line just kind of singlehandedly took over the game and made it relatively easy for the offensive coordinator to call it,” Smart said. “I mean you can run the ball like that it makes things much easier.”

But Georgia gave up two sacks, including on Jacob Eason’s first play after coming in with 10:15 left. He was stripped of the ball, setting up Vanderbilt’s second touchdown. Smart also wants better blocking when running outside with games against Florida, South Carolina, Auburn, Kentucky and Georgia Tech remaining.

“We’re going to play better teams than that, and that’s what concerns me,” Smart said.

This article was written by Teresa M. Walker from The Associated Press and was legally licensed through the NewsCred publisher network. Please direct all licensing questions to legal@newscred.com.