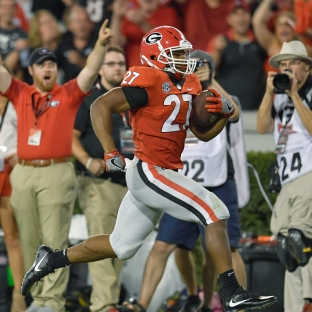 ATHENS, Ga. — The Georgia Bulldogs wanted to make a statement, to demonstrate they’re ready to be part of the national championship conversation.

They’re only part of the way there.

Georgia climbed into The Associated Press Top 10 on Sunday after a 31-3 thrashing of then-No. 17 Mississippi State , a game that showed off a wealth of talent between the hedges.

Freshman quarterback Jake Fromm came through again on the big stage, throwing a pair of touchdown passes. Nick Chubb scored twice and led a deep running game that surpassed 200 yards on the ground. The defense swarmed all over a team that was averaging more than 47 points a game, keeping Mississippi State out of the end zone.

“We know for a fact that we’ve been on that level,” said receiver Terry Godwin, who set the tone by hauling in a 59-yard touchdown pass on Georgia’s first offensive play. “It was just time for us to put it out here on the field. Let y’all see it, and let the world see it. I feel like we’re doing that this season.”

But, for all those Georgia fans who were barking and whooping it up on the way out of a gleeful Sanford Stadium late Saturday night, it’s worth noting that the Bulldogs have been here before.

By moving up four spots to No. 7 in the latest AP poll, Georgia has now been ranked in the Top 10 at some point during each of the last six seasons. But the Bulldogs haven’t been a serious championship contender since 2012, when a heartbreaking 32-28 loss to Alabama in the SEC title game cost them a chance to play for the BCS title.

Next up: a trip to Rocky Top for an SEC clash with struggling Tennessee.

“Every game’s different,” Smart said. “I thought the kids played real hard. But we’ve got to do it again next week. We’ve got a good opponent. That’s just the way the SEC is.”

Smart’s assessment of the Volunteers (3-1, 0-1) might be a bit of a stretch — after all, they’re coming off a dreary 17-13 victory over winless Massachusetts — but this is definitely the type of game that’s tripped up the Bulldogs in recent seasons.

Georgia is eager to show this group won’t fall into the same trap.

“This team that we have is a very humble team and we’re very disciplined,” linebacker Davin Bellamy said. “We can’t be too high on this win, because got to go to a tough environment next week and play some football.”

About the only downside from the Mississippi State rout was offensive lineman Solomon Kindley reinjuring a sprained ankle that had limited him in Georgia’s first two games against Appalachian State and Notre Dame.

While X-rays were negative, it’s not known how long he might be out.

Otherwise, the Bulldogs came out of the game in good shape.

Now, they’ve got to show they can handle the hype. The victory over Mississippi State definitely made a statement, but it requires a strong follow-up.

“It doesn’t matter who we play,” linebacker Lorenzo Carter insisted. “We’re going to keep playing our brand of football: fast, physical, fly around to the ball. Our offense is going to keep pounding people. It just translates from practice. We practice hard and we do everything the right way. We’ve just got to keep rolling.”

This article was written by Paul Newberry from The Associated Press and was legally licensed through the NewsCred publisher network. Please direct all licensing questions to legal@newscred.com.