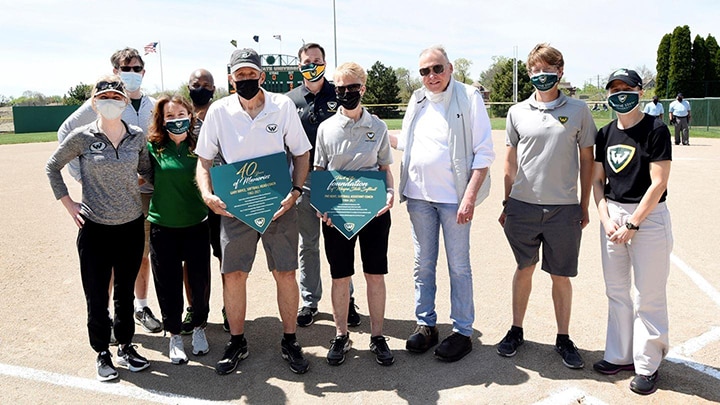 After 40 seasons and 1,340 wins, Gary Bryce retired as the head softball coach at Wayne State (MI) last month. He’s the all-time winningest coach in DII softball, and ranks sixth in total victories regardless of division.

Bryce is a 10-time GLIAC Coach of the Year and finished with a career record of 1,340-793-8. The Warriors made it to the final eight of the DII softball championship three times under his watch. He was inducted into the NFCA Hall of Fame in 2008.

Shortly after the 2021 season ended in May, Bryce spoke with NCAA.com in a phone interview.

Questions and answers have been edited for clarity.

NCAA.com’s Brenden Welper: How did you get the job at Wayne State?

Gary Bryce: I was coaching softball at Royal Oak Dondero (High School), which is now a middle school. And Diane Laffey recommended me for the job. Vern Payne was the athletic director, and I went in and had about a 10-minute interview. And I got the job.

Diane Laffey is the all-time winningest high school softball coach in the state of Michigan.

NCAA.com: Which games stick out to you from your career?

Bryce: I’ll go back to the first couple years I was at Wayne. The first year I had the ’82 team was the first year the NCAA took over women’s sports. And they only took 10 teams to the national finals.

We finished 10th and we were bumped. To this day, I don’t know how we got bumped, but we got bumped. So we didn’t get to go.

So the second year, in ’83, we actually finished third in the country and we got to go. We went and played Cal State Northridge in Los Angeles, which was a trip. Our kids got off the plane with their boomboxes back then. They were wondering why everybody was looking at them, and that was because of the boomboxes. We were the ones out of place.

That was the first regional that we played in. Cal State Northridge had a kid named Kathy Slaten, and she ended up being a first-team, four-time All-American. She beat UCLA three times when UCLA was really the Division I powerhouse. And we were good. She was better.

If she’d pitched in DI, they would’ve probably won the nationals in DI. But (Cal State Northridge) won three national titles. And that made me look and see what we had to do to compete at that time.

We never won it, but we went to the NCAA tournament 23 times and we had some “almosts.” That’s probably the exciting part, is getting there and competing and having the opportunity to play at that level. NCAA.com: If someone would’ve told you at the beginning of your career, that you would become one of the greatest college softball coaches ever, what would you have said?

Bryce: I would’ve probably said that’s a little on the crazy side. I never coached for the accolades.

When I was a young kid, there used to be an open field across the street. Baseball was a big sport back then in the ’40s, because you didn’t hear too much about football. I’d take my bat that had a screw in it with tape on it and go out there. We’d play in the weeds that were up to our knees because we weren’t very tall. And that’s how I got involved in sports, and I’ve been in sports my entire life.

I’d been playing softball, men’s fast-pitch, since 1960. There were no women’s sports when I graduated in 1963 from the the University of Michigan, basically. Then the state of Michigan brought in girl’s fast-pitch in about the middle ’70s, somewhere in there.

And then I took over the Dondero team. I was there five years and was fortunate to win a state championship in ’79. By ’81, I was at Wayne State.

If you would’ve told me when I graduated from U of M in 1963 that I would coach softball for 45 years, I would’ve bet every dollar I had that that would never happen.

NCAA.com: How were you able to adapt to the changes in college sports and still maintain success?

Bryce: A lot of it gets down to recruiting. In our game, if you get a couple good throwers, you got a chance to win every game assuming you have halfway decent players out in the field.

We’ve always had pretty good throwing. In 2016, we had the national player of the year, Lyndsay Butler, who was a pitcher. She was almost unbeatable.

THE DII REPORT: Here are the final Power 10 rankings for the 2021 DII baseball season

When I first came to Wayne I inherited a team that Diane Laffey had had, and they were very experienced. Pat Kent, who played for me for two years and was my assistant all the rest of the time, was Wayne’s first woman First Team All-American. And off that team, we had four others that made All-American.

So people often say, “Well, what was your favorite team?” It was my first one. They were very experienced. Diane Laffey had done a really nice job with them. I took over a winner, and that just propelled us to move forward. I was fortunate.

Credit to the kids, credit to my assistant coaches and I just happened to be at the top.