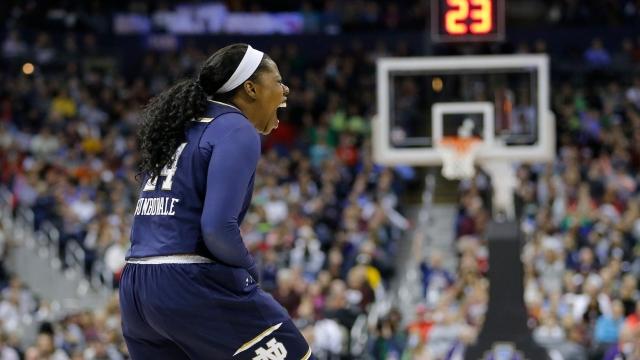 The NCAA announced championship game times and broadcast networks for all six rounds and 63 games of the 2021 Division I Women’s Basketball Championship being held in the San Antonio region.

In addition to ESPN, ESPN2 and ESPNU coverage, for the first time since the 1995 championship was carried on CBS, portions of the tournament will be carried by a broadcast network, as ABC is scheduled to carry at least six tournament games. ABC will broadcast a doubleheader on the opening day of play — Sunday, March 21 — and carry additional doubleheaders during the Sweet Sixteen on Saturday, March 27, and Sunday, March 28.

“ESPN’s coverage of women’s basketball has always been driven by our passion for the sport, its players and its coaches. We’re proud to continue our commitment with the addition of ABC to our network lineup for this year’s NCAA Division I Women’s Basketball Championship,” added Carol Stiff, ESPN vice president, women’s sports programming and acquisitions. “As home to the championship for the past 26 years, and after the cancellation of last year’s women’s tournament, we can’t wait to bring the best of women’s college basketball to even more viewers as the sport crowns a new champion.”

“We are deeply appreciative of our partnership with ESPN and their commitment to broadcasting every game, in full, for all rounds of the 2021 championship on the ESPN family of networks,” said Nina King, senior deputy athletics director and chief of staff at Duke and chair of the Division I Women’s Basketball Committee. “Including games on ABC this year is exciting for all involved, with our student-athletes, teams and fans all benefiting from this outstanding coverage.”

Championship play will take place in five venues and six courts in San Antonio, Austin and San Marcos, Texas, with the Alamodome hosting two of those courts.

First-round play will take place March 21-22 at the Alamodome, Bill Greehey Arena on the campus of St. Mary’s (Texas), Frank Erwin Center (Texas), University Events Center (Texas State) and the UTSA Convocation Center. Games on March 21 will tip off at noon Eastern time and can be seen on ABC, ESPN, ESPN2 and ESPNU. Coverage on March 22 will start at noon on ESPN, ESPN2 and ESPNU.

Second-round play will be held entirely at venues in San Antonio, with the Alamodome, Bill Greehey Arena and the UTSA Convocation Center playing host March 23-24. ESPN, ESPN2 and ESPNU will broadcast second-round games.

The championship will come to the Alamodome for all remaining rounds, with the Sweet Sixteen games played March 27-28 and carried on ABC, ESPN and ESPN2. ESPN will air all the Elite Eight games, which will be March 29-30.

The Women’s Final Four will be April 2 and 4. National semifinal games will tip off at 6 p.m. and 9:30 p.m. Eastern time on ESPN, with the national championship game at 6 p.m. on ESPN.

This year will mark the 26th straight year that ESPN has served as the championship’s TV home. All games will be available online via the ESPN app.