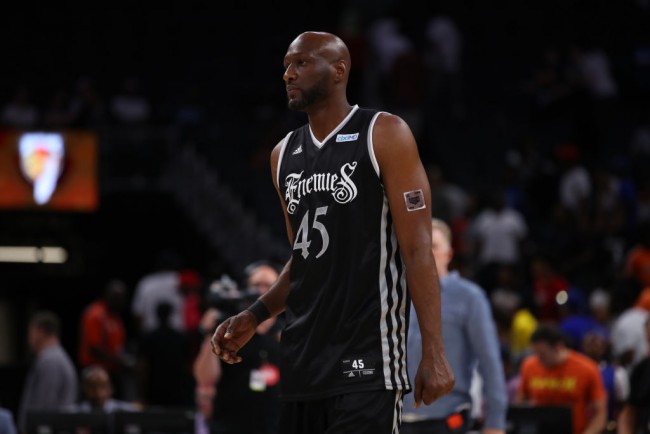 From the basketball court to the boxing ring! Former Los Angeles Lakers forward Lamar Odom will be having his first boxing bout this June against a still unknown opponent. (Photo : Gregory Shamus/Big3/Getty Images)

Lamar Odom will enter a new era of his life with a brand-new sport.

This time, the former Los Angeles Lakers forward will step in the ring to set aside shooting the ball. The 41-year-old Odom has signed an agreement with the Celebrity Boxing. He is set to fight inside the square at the Showboat, Casinoo in Atlantic City. New Jersey on June 12.

According to TMZ Sports, the two-time NBA champion’s opponent is yet to appear in the ring. But, Damon Feldman, the Celebrity Boxing promoter told the sports news outlet that he is still on the move to find a worthy and “big” name in showbusiness who will be matched with Odom.

The erstwhile NBA star spent his longest time with the Los Angeles Lakers, where he was hailed as the Sixth Man of the Year in NBA Season 2010-2011. Shortly, he was traded to the Dallas Mavericks in 2012 after his seven-year career with the Lakers. However, his stay in Dallas was cut short following his trade to the Los Angeles Clippers.

After 14 years in the NBA, Odom’s career weakened and teams no longer showed any interest in him. In 2014, he flew to Spain to continue his declining basketball career there.

In his recent basketball path with Ice Cube’s Big Three League, Odom was removed in 2019 due to his inability to play basketball, the Bleacher Report wrote.

He may be slowing down due to age but according to Ice Cube, the co-founder of the BIG3 League, the league is looking for someone who can really play. Instead of someone who cannot play at their expected level or someone who has health issues, they are focused to maintain the standards that they want to embrace.

Besides Odom, three other former NBA players were deactivated in the BIG3 League. Baron Davis, Bonzi Wells and Jermaine O’Neal were the BIG3 league players who bid goodbye to the league because of incompetence and health issues, as per Myron Medcal of ESPN.

Odom only played one game in the Big 3 League with the Enemies. He posted two markers and four boards for his team, as the Enemies fell to Bivouac in Big 3 League’s season opener, 50-43. It was his first professional basketball game since his NBA days in 2013 as a Clippers player.

In 2015, Odom was rushed to the hospital after fighting for his life at Nevada brothel. It was found out that the 6-foot-10 Odom had suffered strokes and cocaine and opiate overdose, as per doctors’ findings. He described his experience as “near-death,” and he had been living sober since it happened.

In 2009, Odom married Kim Kardashian. They were married until 2013 when they decided to cut ties. Kardashian filed a divorce in that year, and three years later, it was finalized.

Boxing is not commonplace for the basketball players anymore, as the latest former NBA player to step in the ring was Nate Robinson. His first boxing fight ended in a loss against Internet star Jake Logan via knockout.

The upcoming June bout will not be bland with the addition of singer Aaron Carter in the event card. Carter, like Odom, has not yet known his opponent.

5 Unscripted Moments That Happened in the WWE History

5 Tips on How to Be a Good Sports Photographer