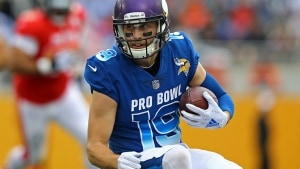 
The NFL preseason is in the books. The final cuts have been made and the rosters are set. With Thursday’s kickoff between the Atlanta Falcons and Philadelphia Eagles looming, let’s take a closer look at the 2018 NFL rosters.

There are 80 former DII football players on current NFL rosters, down from the 90 that opened up the 2017 season*. Some have made themselves household names, like Super Bowl hero Malcolm Butler and 2017 breakout star Adam Thielen. Others are rookies simply looking for a chance, like 2018 Harlon Hill winner and national champion quarterback Luis Perez.

Here’s a closer look at former DII players on NFL rosters by the numbers:

1 —  Quarterback on a roster. That honor goes to Texas A&M-Commerce’s Luis Perez. It’s rare for a DII quarterback to get a chance, even if it’s on the practice roster like Perez. Last year, there were no DII quarterbacks in the NFL.

3 —  The number of players who kick a football. The Los Angeles Rams’ Greg Zuerlein out of Missouri Western has a Pro Bowl appearance to his name.

5 —  The number of former DII linebackers and running backs each in the NFL. Tiffin’s Chris Ivory earned a Pro Bowl trip in 2015 with a 1,000-yard season.

6 — NFL teams without a single DII player on its roster. The Detroit Lions, Green Bay Packers, New England Patriots, New Orleans Saints, San Francisco 49ers, and Washington Redskins had some in camp, but none made the final cut.

7 — The number of former DII players the Indianapolis Colts roster, more than any other team in the NFL. The Los Angeles Rams and Tampa Bay Buccaneers are a close second with six apiece.

8 — Tight ends on NFL rosters that played DII football. Central Missouri’s Delanie Walker may be the best known of the bunch.

14 — Wide receivers on NFL rosters. West Alabama’s Tyreek Hill is a star in the making, already with two All-Pro appearances, while the aforementioned Thielen is widely considered one of the better receivers in football.

2009: Adam Thielen’s only option was a $500 scholarship at Minnesota State.

11/23/17: Becomes 1st Viking since Randy Moss to have 1,000 yards receiving before end of November. pic.twitter.com/rcHe6BNenS

16 — The most populous positions on NFL rosters go to defensive backs and offensive linemen. Twelve-year veteran, four-time Pro-Bowler, and former Shippensburg star Brent Grimes may be the best of the bunch.

(* Note: All rosters per NFL.com. Rosters included injured reserved and practice squad players and are noted in the list below. Several teams were still at 52 spots on their rosters, while others had not filled out their practice squads at the time of the release of this article. Those updates will be made as we are made aware of them.)