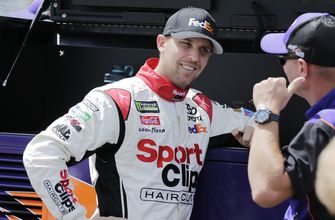 DARLINGTON, S.C. (AP) — Denny Hamlin is at it again at Darlington Raceway.

The Joe Gibbs Racing driver who swept both the Xfinity and Monster Energy NASCAR Cup Series races here a year ago got off to a strong start Saturday by winning the pole for the Southern 500. It’s the first time Hamlin’s won the pole here, but far from the first time he’s been on top.

Hamlin won his first Southern 500 in 2010. He’s finished in the top 10 in 10 of his 12 Cup starts at Darlington. Hamlin’s been even more dominant in Darlington’s Xfinity races, with five victories in his last eight starts.

In qualifying, Hamlin posted a fast lap of 173.571 mph to win his first Southern 500 pole, his third pole of the season and 29th of his NASCAR Cup career.

“We’ve done a great job with the car all weekend,” Hamlin said. “Pretty optimistic that we can continue to build momentum over the next two weeks.”

Erik Jones was seventh, with Joey Logano, Kurt Busch and William Byron rounding out the top 10.

Larson thought he had a better car than Hamlin for much of qualifying, but lost a bit of grip in between the first and second turns to cost him the pole.

“Disappointed that we didn’t get the pole,” Larson said. “But it’s good to qualify good here. It’s a tough race tomorrow. If we can keep our track position and keep it out of the wall we should have a good shot.”

Kevin Harvick, who leads the series with seven wins, didn’t make it past the second round of qualifying and ended 22nd.

All eyes at Darlington, as they’ve been the past two years, will be on Hamlin, who has finished every lap he’s begun in his 12 Cup races at the track “Too Tough To Tame.”

Hamlin shrugs when asked about his success at a place so many struggle to get around. He’s learned to run close to the track’s troublesome wall and rocket off without losing position.

“It’s just something about the race track that fits my particular driving style,” he said.