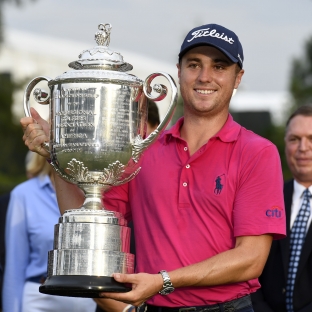 “It’s pretty emotional for me to be quite honest,” Alabama head coach Jay Seawell said. “The great thing about coaches is to you get a chance to see young people when it’s all about a dream. It’s so fun when those dreams become reality. I am so proud of Justin. He’s a special young man and represents Alabama golf so well – not only with his game but with who he is and how he handles himself. It’s a special day and I am happy for him because I know how big this is for him.”

Thomas, who entered the event ranked No. 4 in the Fed Ex Cup standings and No. 14 in the world rankings, captured his fourth tournament title this year. The 24-year-old won the CIMB Classic, SBS Tournament of Champions and the Sony Open in Hawaii prior to Sunday’s triumph to become the first player on tour this year to win four events. In addition to his four victories on the year, Thomas has nine top 10 and 11 top 25 finishes on the year.

During his victory at the Sony Open in Honolulu, Thomas became the youngest PGA professional to shoot a round of 59, which came in the opening round of the event.

Thomas entered the fourth round of play at this year’s final major in third place, but carded an impressive 3-under par 68 during Sunday’s final 18 holes of play to finish at 8-under par 276 (73-66-69-68). There was a four-way for second place at 6-under par.

During his career at Alabama (2011-13), Thomas helped lead the Tide to the 2013 NCAA national championship — the first in program history. The Goshen, Kentucky., native also became the first Alabama golfer to earn the Haskins Award and the Nicklaus Award, presented to the National Player of the Year, and the Phil Mickelson Award as the National Freshman of the Year. He was a two-time first team All-American and was also named the 2012 Southeastern Conference Golfer of the Year and Freshman of the Year.