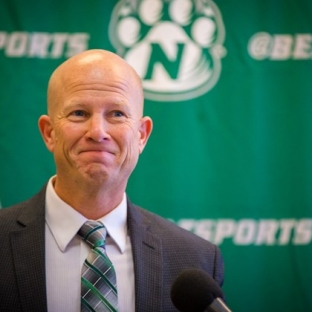 MARYVILLE, Mo. – In a few days, Rich Wright will be immersed in his second world, coaching the Northwest Missouri State football team.

Anybody who walks into Wright’s office can quickly ascertain that his main world revolves around his wife and two daughters. Portrait photos of his family hang on the walls along with national championship pictures.

“They mean the world to me,” Wright said. “The neat thing about being at Northwest Missouri State I feel like as a coach you can have a balance. We talk about family to our players, but I want our players to see that it truly is about family.

“The fact that my wife and kids can share all of this with me and for my kids to know my players is really important. My defensive linemen come to my house three times a week and always have. We watch film together in my basement in my house. I want them to see the husband and the father as well.”

For the previous six seasons at Northwest, Wright was the defensive coordinator. He knew the defensive players well and they knew him. They saw the passion he brought to the job every day.

In practice and in games, he would sometimes scream if mistakes occurred. But you also saw seconds after a tongue lashing, he would gently explain himself to the player, words that only him and the player shared.

“I am a people’s person,” Wright said. “Anybody who knows me would recognize that.”

The difference this year from the past six is Wright is now the head coach. While he knows the players on the offensive side, he didn’t have the more personal relationship like he has with the defensive players.

During spring football and through the summer, Wright made a concerted effort to build those relationships

“One of the things I feel I do a pretty good job is motivating people,” Wright said. “In order to do that, you need to understand the people you are working with. Make them feel comfortable in our relationship.

“I think it is really important. If those kids know that I genuinely care about them, they are going to play hard for us. Trust and care take time. It is something that doesn’t happen overnight. It was really important for them to get to know who I am and what I am about and get a feel for my consistency. Am I the same guy day in and day out? Our defensive kids have a good perspective on that and that helped because those kids lend to my credibility.”

For football teams to win championships, everybody needs to be on the same page, working for the same goal.

Over the past two decades, Northwest has done this better than just about every Division II program in the country. The Bearcats have won three of the last four national titles. That success led to Abilene Christian plucking Adam Dorrel from the Bearcat family.

But true to the family tradition at Northwest, athletic director Mel Tjeerdsma looked within to find the 20th head coach in the program’s history. The entire staff showed loyalty to Wright by staying.

“I can’t overstate that enough how important that was, just from a continuity standpoint and day to day operation,” Wright said. “I walk down the hall and have all these guys that have done this in all phases, recruiting to fundraising to the X and O. It makes a tremendous difference. Their knowledge of our kids and the comfort level there. They don’t have to change and that makes my life infinitely easier.”

In many ways, the first day of practice on Aug. 7 will be like all the others in Wright’s previous 12 seasons on the Northwest coaching staff.

“I am going to be excited,” Wright said. “I always am. I am a guy that wears my emotions on my sleeve. I enjoy our kids so much. It is getting back like a family reunion. Getting back to work. Their attitude and effort are contagious for me, too. It is always a fun day.”

All eyes will be on the Bearcats again this year. They are definitely the team to beat. Northwest has won the last two national titles and is picked No. 1 in just about everybody’s preseason poll.

Like any season, there are challenges ahead for Northwest. The Bearcats graduated a strong senior class. They have to find a new starting quarterback and replace a strong defensive line.

“More than anything, every year is different, every year is unique,” Wright said. “It is its own puzzle. There are no two pathways that are going to be the same. The road is going to be different because it is a different cast of characters, different circumstances. They have to be ready for that. They will have their own unique challenges and obstacles as we go on in this thing.”

With close to 20 seniors on this year’s roster, Wright has numerous players to count on for leadership. But Wright recognizes it will be a new role for many of them.

“I feel like it is a group that has really grown in leadership in the last 365 days,” Wright said. “One thing when you have as good a class as we did last year, all the juniors had to do was fulfill roles. They didn’t have to step to the forefront. They had to make a transformation, along with myself in growing into this new role.”