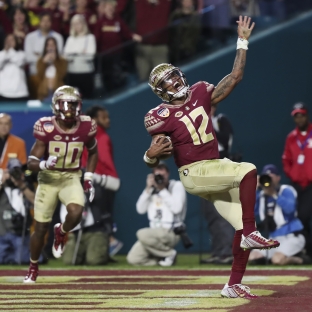 TALLAHASSEE, Fla. — Florida State will find out immediately if it has the talent to get back to the College Football Playoff for the first time in three years.

“I think this schedule has got everything involved in it. And it will be extremely challenging, but that’s why you play the game,” coach Jimbo Fisher said.

Florida State is hoping it learned from its mistakes from last season when it won its first two games and were ranked second before a 63-20 drubbing at Louisville on Sept. 17. After a last-second loss to North Carolina, Florida State was 3-2 before it won seven of its final eight.

The defense should be FSU’s strength early on. It returns 10 starters, including junior safety Derwin James and cornerback Tarvarus McFadden, who tied for the national lead in interceptions last season with eight.

The offense has the most questions. Quarterback Deondre Francois threw for 3,350 yards last season but running back Dalvin Cook and the top three receivers have all departed.

Francois took some major hits last season as the offensive line gave up 36 sacks. The sacks were due to a combination of things — Francois needing to learn how to throw away the ball, receivers not running the right routes and the line. All three are going to need to be better if Francois is going to make it through the season in one piece. The offensive line, which has struggled with consistency, will have two new starters, including Rick Leonard moving from right tackle to left tackle.

James played in only two games last season due to a knee injury, but he is still being considered as one of the top defensive players in the nation. Besides playing safety, he will see time at linebacker and also as a rush end in passing situations. Fisher is also looking to get him some snaps on offense along with returning punts. Many are comparing James to Jabrill Peppers, who played at Michigan before being selected in the first round of the NFL draft by Cleveland, because of their versatility and athleticism.

Florida State hosts Louisville and reigning Heisman Trophy winner Lamar Jackson on Oct. 21. The Seminoles also have late-season road tests against defending national champion Clemson (Nov. 11) and Florida (Nov. 25). Florida State has not lost three straight to the Tigers since 2007 but it has a four-game winning streak over the Gators for the third time in series history.

The Sept. 2 game against Alabama in Atlanta marks the third time in the past four years that Florida State has opened against a Power 5 opponent at a neutral site. The Seminoles defeated Oklahoma State in Arlington, Texas, in 2014 and rallied to beat Mississippi in Orlando last year.