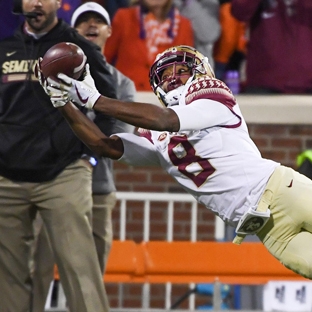 TALLAHASSEE, Fla. — Instead of Florida State being in the hunt for a College Football Playoff spot, the Seminoles go into their final three games needing to win out in order to go to a bowl game for the 36th consecutive season.

In a season where not many things have gone right, Florida State (3-6) does catch a break. Its remaining games are against teams that are a combined 9-19. The stretch begins Saturday with Football Championship Subdivision foe Delaware State (2-8), followed by a Nov. 25 trip to Florida (3-6) and the Dec. 2 rescheduled game against Louisiana Monroe (4-5).

“We know there is a bowl streak and we don’t want to ruin that. It’s in the back of our minds,” center Alec Eberle said.

The Seminoles would need to win four straight to avoid their first losing season since 1976, which was Bobby Bowden’s first year at the school. They finished 6-6 during the regular season in 2006 and ’09 and won the bowl game to finish above .500.

Coach Jimbo Fisher said during his Monday news conference that he is trying to focus on this week first instead of looking ahead.

Fisher feels like there are some things to build off of last Saturday’s 31-14 loss at fourth-ranked Clemson . Despite it being Florida State’s third loss by 17 or more points, it was within a field goal and had the ball with six minutes remaining before a turnover stifled any momentum.

The defense, which went into the game with just six takeaways, forced two turnovers and both of the offense’s touchdown drives went at least 85 yards.

Kickoff vs. Florida on 11/25 is scheduled for noon.

If the Seminoles are going to continue both streaks, it must get better play out of an offense that is near the bottom among Power Five programs. They are second-worst in points (18.1 per game) and fourth-worst in total yards (324.6 per game).

MORE: Sooners in ideal position for run at playoff spot

Fisher said that quarterback James Blackman has improved tremendously since the beginning of the season, even if the numbers don’t show it.

The freshman, who took over when Deondre Francois suffered a season-ending knee injury in the Sept. 2 opener against top-ranked Alabama, has thrown eight interceptions compared to seven touchdowns over the past six games after not having a pick in his first two. The game against Clemson marked the second time in three games he has completed less than half of his passes.

“Sometimes it shows up in results, sometimes it doesn’t. But his ability to have the game slow down and think and make the right decisions and do those things and how he articulates things, it’s ten-fold,” Fisher said.

Besides continuing the bowl streak, the 15 practices would give a young roster more opportunities to gain experience. This week’s depth chart shows three freshmen starters on offense and seven freshmen on the two-deep on both offense and defense.

A bowl game would also give the program some momentum going an offseason that will have plenty of questions. Since winning 33 of 34 and a national championship from 2013 to the middle of 2015, the Seminoles have gone 17-11 and are 10-10 in conference games. The loss to Clemson marked only the second time they have had a losing record in ACC play since joining the conference in 1992.

“Winning is what propels you into offseason training,” Eberle said. “It would help with the mentality and mindset.”