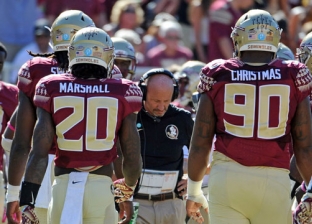 TALLAHASSEE, Fla. — Florida State has largely been known for its offense during Jimbo Fisher’s eight seasons as head coach.

This could be the season where that could change. FSU has a defense with enough talent to outshine the Seminoles’ offense.

The third-ranked Seminoles return nine starters on defense, including two that were named to The Associated Press preseason All-America Team. With plenty of depth on the line and in the secondary, defensive coordinator Charles Kelly has not quieted expectations going into the Sept. 2 opener against No. 1 Alabama in Atlanta.

“This is probably the best unit since I’ve been here,” said Kelly, who is in his fifth season at the school and fourth as coordinator. “We certainly have more experienced guys. Any time you are returning a lot of people who have played in plenty of situations it helps you.”

That is quite a difference from this time last year, when the defense was inexperienced (only five starters returned from the 2015 squad). Things got worse when Derwin James suffered a season-ending knee injury in the second game.

The Seminoles lost two of its next three games after James’ injury. After a last-second loss to North Carolina on Oct. 1, the defense was last among the 65 teams in the Power Five conferences, allowing 7.0 yards per play, 9.4 yards per pass play and 25 plays of 30 yards or more. They also allowed an average of 42.3 points in their first four games against Football Bowl Subdivision teams.

The defense’s performance in the final eight games of the season has served as a springboard to this year. During the stretch, the Seminoles allowed opponents to score over 30 points just twice, had two games where they didn’t allow an offensive touchdown and allowed only eight plays of 30-plus yards. The unit also improved to 22nd among Power Five teams in average yards per play (5.3) and 29th against the pass (7.1 yards per play).

“We didn’t dwell on it. We showed why it happened and learned from it,” said Kelly of the early struggles. “We had young guys that came on and developed down the stretch.”

The unit will be led by one of the best — if not the top — secondary in the nation.

Cornerback Tarvarus McFadden tied for the national lead in interceptionswith eight and James has been hailed by a couple of national publications as the best defensive player because of his versatility. Besides being a physical safety, James has played linebacker and been a rush end in passing situations.

Derwin James and Tarvarus McFadden have been named to the First Team #APAllAmerica Team.

Even though the secondary has received the most national accolades, Kelly and Fisher have been most pleased with the defensive line. Even with the graduation of DeMarcus Walker (a second-round NFL draft pick by the Denver Broncos), the line could be better this season.

Walker had 15 sacks last season but sophomore Brian Burns is expected to fill that void. Burns had 9.5 sacks last season, which is the ninth-most of any returning player in FBS. Kelly also pointed out that tackles Derrick Nnadi and Demarcus Christmas have made the most improvement since the spring.

The linebackers have three senior starters but also have some depth in case of injuries. Jacob Pugh was named the top defensive player of spring practices and is adept at pass rushing along with dropping back into coverage. Matthew Thomas, who is coming off a career-best 15 tackles in the Orange Bowl against Michigan, has missed the last two weeks due to injuries.

“We have a great interior and guys that can rush the quarterback. We have one of the best secondaries in the country, I feel,” James said. “I feel like we have a great defense overall. . We’re deeper. We’re stronger. We’re faster.”

Fisher and the coaching staff began to put in the game plan for Alabama on Wednesday. With Brian Daboll in his first game as the Tide’s offensive coordinator, Kelly said he has studied some past tapes from when Daboll was a coordinator with Cleveland Browns, Miami Dolphins and Kansas City Chiefs to try and get some idea of what might be in store.

Alabama guard Ross Pierschbacher said there are a lot of defensive similarities between the two teams, but that the Seminoles’ defensive line will be a big challenge.

“I think their D-Line is a little more up field than ours is. They try to penetrate,” he said. “We’ve been working hard this camp to try to match up with them.”