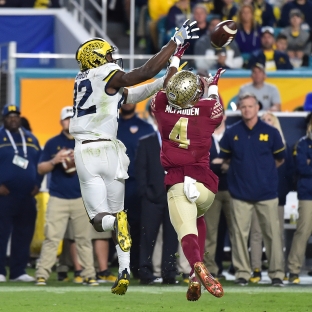 TALLAHASSEE, Fla. — Even though Tarvarus McFadden tied for the national lead in interceptions last season, the Florida State cornerback expects opposing offenses to continue to test him this season.

The 6-foot-2, 198-pound junior started all 13 games last year but struggled early. He allowed four touchdowns in the first six games and was called for a penalty late in the Oct. 1 loss to North Carolina that led to the Tar Heels’ game-winning field goal.

McFadden though learned from his early mistakes and ended up winning the Jack Tatum Award, which is presented to the nation’s top defensive back. Five of McFadden’s interceptions came during the stretch where the Seminoles won seven of their final eight games.

“He’s one of those guys that is instinctive. His length helps him,” Kelly said. “When he puts his arms up, he has a long wingspan. He has gotten better using his hands in bump and run.”

Kelly also noted that he expects McFadden to continue to get challenged because on many plays he is lined up on the short side of the field.

McFadden, who missed spring practices due to shoulder surgery, said the biggest thing he has been working on with his technique, especially when covering short routes and in the red zone. He has also been working on improving his tackling.

Another area that McFadden is concentrating on is doing a better job in man coverage. He has a great closing burst of speed to break up or contest passes but sometimes has been easy to shake early in coverage.

“Coming back in fall camp, I’m just happy to be out here with the team again. I have to do my job and make the plays,” he said.

Florida State’s secondary should be one of the team’s strengths this season. Only one starter graduated and they should be buoyed by the return of safety Derwin James, who played in only two games last season before suffering a knee injury.

McFadden and the secondary will get tested quickly in the Sept. 2 opener in Atlanta against Alabama. McFadden is likely to be matched up against Calvin Ridley, who goes into the season as one of the top receivers in the Southeastern Conference.

McFadden though isn’t just looking at the Alabama game, but to the goals for the rest of the season.

“I think if we don’t get a National Championship then we’ll feel like we’ve failed. We’ve got big goals this year,” he said. “We starting with Alabama, but it ain’t only about Alabama. We’ve got to play Miami, Clemson, and everyone else that comes in the way.”