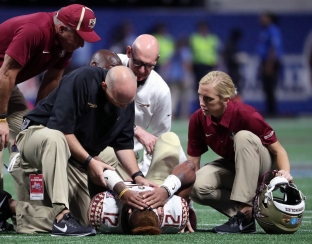 Coach Jimbo Fisher said Monday the sophomore faces four to six months of rehabilitation after his operation for his torn patellar tendon in his left knee.

Francois was hurt during the fourth quarter of Saturday’s loss to top-ranked Alabama in Atlanta. The third-ranked Seminoles host Louisiana-Monroe on Saturday.

Fisher said James Blackman will replace Francois. The only other time a Florida State quarterback started as a true freshman was in 1985 when Chip Ferguson faced Miami.

Jimbo Fisher: “James Blackman is the No. 1 QB.” pic.twitter.com/TmfzWwiege

Junior J.J. Cosentino has played in five games the past two seasons. Also on the roster are true freshman Bailey Hockman and walk-on freshman Jake Rizzo.