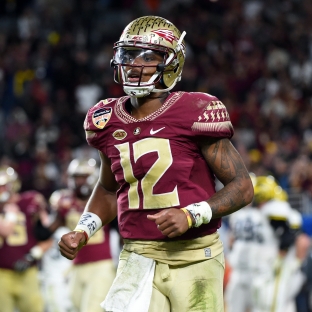 TALLAHASSEE, Fla. — Deondre Francois had an appropriate answer when he assessed his performance last season — bumpy.

The Florida State quarterback is hoping things go a little smoother in his sophomore season.

That would be judged as a successful season for most freshmen quarterbacks. However, when the standard at Florida State is Jameis Winston — who won the Heisman and led the program to its third national championship in 2013 as a freshman — it is considered good.

“Obviously it wasn’t a year that Jameis had as a freshman, but it was a whole lot better than the kind of year most freshman had,” said offensive coordinator Randy Sanders. “There’s obviously opportunities for him to improve.”

Francois said that he talks with Winston from time to time and that the biggest advice Winston gave him was to listen to what coach Jimbo Fisher tells him and to not necessarily take the method how Fisher does it to heart.

Fisher, who can be tough on quarterbacks, senses a more confident Francois and hopes he can build on that.

“Last year he proved he could do it on the field. You watch situational football, as good as anybody,” Fisher said. “He can do the things he did last year, and he can grow in other areas.”

The biggest areas where Francois wants to improve are accuracy and getting rid of the ball quicker. He completed 58.8 percent of his passes, which was 66th among 100 quarterbacks in the Football Bowl Subdivision to average 15 or more pass attempts per game.

Francois had three games where completed less than half of his passes, including the Orange Bowl win over Michigan where he was 9 of 27 for 222 yards with two touchdowns and an interception. One of the completions was a 92-yard touchdown to Nyqwan Murray, which is the longest TD pass in Orange Bowl history.

Another accuracy problem came on third downs of 4 yards or more where he completed just 45 percent (38 of 80).

The other area where Francois looks to progress is taking fewer hits and sacks. In its grading of Florida State games last year, the analytics website Pro Football Focus said five of Francois’ 34 sacks were due to him holding on to the ball too long.

“I need to get the ball out of my hands faster. Throw it away when nothing’s there. That’s basically it,” he said. “Trusting my receivers so that I can let it go before they break instead of holding it that one second.”

MORE: Fordham’s Chase Edmonds is the best RB you don’t know enough about

“All of that’s easy to say but there are certain times as a quarterback where you are going to get hit. You have to be willing to stay in there and get hit,” Sanders said.

“Seeing him being willing to stand in there and do it over and over and over, and display the toughness he displayed, was really a pleasant surprise.”

Francois goes into the season as the offense’s leader. After having an experienced group at the skill positions, which made Francois’ adjustment easier, the Seminoles had running back Dalvin Cook and their three most experienced receivers (Travis Rudolph, Kermit Whitfield, Jesus “Bobo” Wilson) either leave early or graduate.

Receivers Auden Tate and Murray began to emerge toward the end of last season and Jacques Patrick is ready to take over as the lead running back after being Cook’s backup the past two seasons.

Francois also has long friendships with Murray and Patrick, having played youth football against them while growing up in Orlando.

Francois and the Seminoles will be tested out of the gate as they open against Alabama on Sept. 2 in Atlanta. Francois is hoping to have as successful an opener as he had last year when he threw for 419 yards and three touchdowns in a 45-34 win over Ole Miss.

“You have to get your juices flowing because it’s Alabama. They’ve been a tremendous program for a really long time,” Francois said.

“But at the end of the day, they’re just like us. They’re guys that are working hard. I know they’re over there preparing for us, and we’re doing the same.”