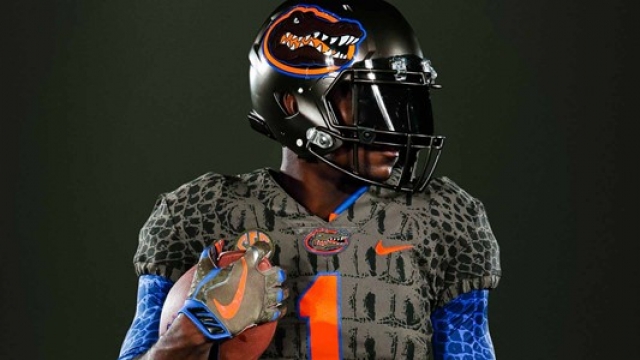 School mascots are a unique idea. Teams taking on the mantle of animals conjures plenty of theoretical Planet Earth showdowns: how would alligators and, say, wolverines fare in an actual tussle?

Of course, in the end, the folks on the field don’t normally resemble animals. There are no bright-blue-and-orange alligators. So for this week’s game with Texas A&M, Florida decided to remedy this by donning jerseys that actually look like alligator skin.

25 years after BHG Stadium became #TheSwamp, the @FloridaGators will take the look of a Gator on Sat.

It’s a pretty stark departure from the Gators’ iconic blue-and-orange combination, a look that stands among the greatest college sports looks. They’ve retained a few blue and orange accents, but the emphasis here is clear: these are alligators, on a football field.

This one-off alternative, which Florida said is the culmination of an 18-month process working with Nike’s best designers, is great in its own way, and the best part might be the intimidation factor: can you imagine lining up across from 11 alligators?

Gators cornerback Chauncey Gardner Jr., someone who relies on the intimidation factor to keep wide receivers in check, sure likes what he sees:

..Haters will hate but real fans will appreciate #SICK https://t.co/beHinjhrr0

Here’s a closer look at a few details from the jersey, including the swamp green color used on both the helmet and the cleats:

A close-up of the helmet, and the jersey pattern.

A close-up of the gloves.