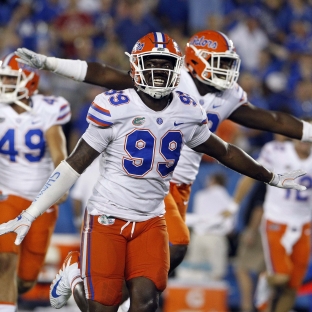 Gary B. Graves | The Associated Press

LEXINGTON, Ky. — Florida’s Hail Mary win over Tennessee apparently was just a teaser of how the No. 20 Gators respond to adversity.

Case in point was their latest comeback from the brink against Kentucky, a gut check that put them in a familiar place in the Southeastern Conference.

Freddie Swain caught a 5-yard touchdown pass from backup quarterback Luke Del Rio with 43 seconds remaining to cap Florida’s rally from 13 points down in the fourth quarter to beat Kentucky 28-27 on Saturday night.

The sophomore will surely remember his first catch of the season for what it achieved, but Swain said his only thought was, “Make a play for my team. Come up, make a play.”

The Gators extended their winning streak over the Wildcats to 31 games, the nation’s longest streak in FBS, and took early control of the SEC’s Eastern Division. Coming a week after a last-second, 63-yard touchdown pass beat the Volunteers 26-20 , this rally required even more resolve after trailing most of the night.

Not to mention, even more satisfaction.

Full highlights from tonight, but we understand if you want to to the 4th quarter.#GatorsWin pic.twitter.com/NOFpDMAdM4

“Well, that was fun,” Florida coach Jim McElwain said of his team’s second straight escape. “You could feel it on the sideline that they didn’t have any quit in them.”

Down 27-14 in the fourth quarter, Florida (2-1, 2-0) got within a touchdown on Brandon Powell’s 6-yard TD run with 7:58 left. Del Rio then marched the Gators 58 yards for the winning score to stun a blue-clad sellout crowd of 62,945 hungry to see Kentucky end a generation of frustration against the Gators.

Kentucky’s desperation attempt to win ended when Austin MacGinnis’ 57-yard field goal fell short as time expired. That sparked a wild celebration by Gators players, who swamped the field after their improbable victory.

Winning required replacing Feleipe Franks with Del Rio late in the third quarter with Florida down 24-14. The junior was intercepted by Darius West on his first series and struggled again on his second possession, but didn’t give up.

“I just tried to settle down as best I could, move the ball, which was encouraging,” said Del Rio, who led Florida’s 45-7 rout of Kentucky last year in Gainesville. The pick was just a miscommunication on my part. I knew we could move the ball better.”

Del Rio ended up completing 9 of 14 passes for 74 yards and a victory that might shake up the quarterback spot. He certainly did his best to shake his and Florida’s offensive struggles.

“We will sit down, evaluate it and look at the video,” McElwain said.

Kadarius Toney rushed for a 36-yard TD and Tyrie Cleveland caught a 45-yard TD pass from Franks for a 14-all tie at halftime. Toney also had a 50-yard pass completion.

This article was written by Gary B. Graves from The Associated Press and was legally licensed through the NewsCred publisher network. Please direct all licensing questions to legal@newscred.com.